Ignatius of Loyola, a Spaniard born in 1491, developed a reputation when he was young of being a ladies’ man, a gambler, and a fighter. Eventually he found himself fighting as a soldier for his country in a battle against the French. During this battle a cannon ball struck Ignatius, wounding one leg and breaking the other.

Our Jesuit tradition started with a cannon ball…

Because they admired his courage, the French soldiers carried him back to recuperate at his home, the castle of Loyola, rather than to prison. His leg was set but did not heal, so it was necessary to break it again and reset it, all without anesthesia. During the long weeks of recuperation, he was extremely bored and asked for some romance novels to pass the time. He was given the only books on the shelf — a book on the life of Christ and another about the saints. After reading these books, Ignatius began to consider becoming “a soldier for Christ.” He did just that and in 1540 founded the Society of Jesus (the “Jesuits”), which today owns and operates Jesuit High School.

The order grew rapidly and assumed an important role in the Catholic Church. During the course of its 469-year history, the order has had an impact in a number of areas. Jesuits have been scientists and theologians, poets and philosophers, explorers and missionaries, pastors and preachers.

The one constant has been an emphasis on education. 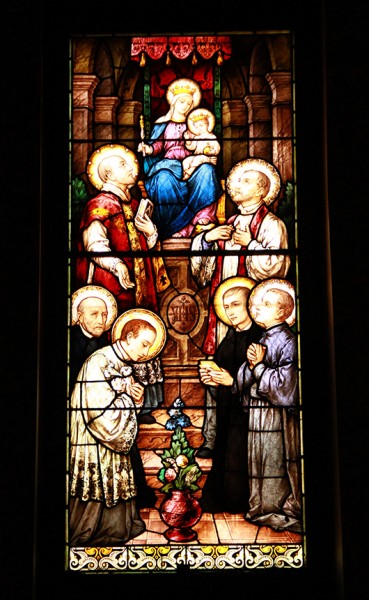 In fact, St. Ignatius Loyola, the founder of the order, is considered one of the world’s great innovators of education. Ignatius’s original plan was that the Jesuits be missionaries, preaching and administering the sacraments wherever there was the hope of accomplishing the greater good. To provide for the education of his followers, Ignatius started schools, which he decided should be open to non-Jesuit students as well. It soon became clear that these schools offered the greatest possible service to the church, by moral and religious instruction, by making devotional life accessible to the young, and by teaching the Gospel message of service to others. Ignatius quickly realized how critical changes in a whole society could come through education, so he made a momentous decision. He revised his original plan and became an enthusiastic champion of systematic education.

From the beginning, Ignatius realized that education was not an end in itself but rather a means to lead the student to care about other human beings.

Ignatius incorporated this goal into the existing pattern of humanistic education which included an understanding of the arts to appreciate beauty, grammar to learn how to read, rhetoric to express oneself, mathematics to enable one to think, and theology to find God. He then fashioned these into an orderly process. The norms of instruction were soon formulated by his successors who established certain basic characteristics for the Jesuit program which included a respect for the varying capacities of students. This orderly process was quite different from the confusion and chaos of the contemporary schools with optional courses and infrequent classes. The organizational genius of Ignatius and his followers, focusing on the individual and stabilized classical studies, gave them a popularity which other educators were not able to achieve.

During the last nine years of his life, Ignatius opened 33 schools. Within a century, 300 Jesuit colleges dotted Catholic Europe. His innovations were perpetuated by his followers so that two centuries later the Jesuits operated 740 schools. Jesuits were called the schoolmasters of Europe during these centuries, not only because of their schools, but also for their pre-eminence as scholars and for the thousands of textbooks they composed.

Today an extensive network of Jesuit schools educates one and a half million students at 90 Jesuit colleges in 27 countries.

Here in the United States, the 28 Jesuit colleges and universities have more than one million living graduates. There are also 430 Jesuit high schools in 55 countries; 58 of these high schools are in the United States. In these schools the Ignatian system of values has attracted exceptionally competent faculty as well as highly qualified students. These schools, which form a Jesuit network, may not be administered in the same way, but they pursue the same goals.

Fr. Norman O’Neal, S.J. wrote a brief account of the life of St. Ignatius in order better to acquaint the teachers, staff, and students of Jesuit with the roots of the order which founded and has influenced that school since 1847. Read Fr. O’Neal’s narrative about St. Ignatius and the Society of Jesus.