2018 Rivalry Game Day: Students Fired Up at Carrollton and Banks

The CST broadcast (local channel 37) and a live stream on CrescentCitySports.com will begin at 7 p.m. 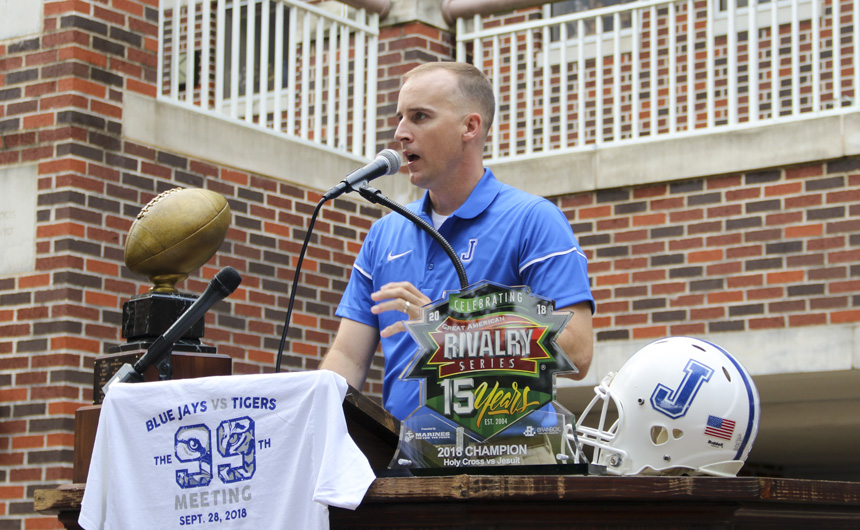 “Gentlemen, you know I have time in the military, and I can tell you that I could never have a résumé like that,” said Fr. Fronk before calling Jesuit’s Distinguished Military Alumnus to the podium. “Putting in that type of time and those types of experiences is absolutely incredible. His service has earned him a Purple Heart and the Bronze Star. Again, they don’t just give those things away. They are incredible honors.”

On the morning of Game Day for the Great American Rivalry Series, Blue Jay spirit was at an all-time high, and LtCol Hasseltine had one mission: keep the enthusiasm rolling. He succeeded in his Morning Assembly assignment, speaking on tradition and using his 20-plus years of Marine Corps service to fire up nearly 1,400 Blue Jays for a big night at Tad Gormley Stadium.

LtCol Hasseltine closed his address with a challenge to students, as Ignatius often ended his letters to Jesuit missionaries, using the expression ite, inflammate omnia—“go, set the world on fire.”

The festivities for the 99th meeting of Jesuit and Holy Cross will start at 4 p.m. outside the stadium. Complimentary food and refreshments will be provided at the tailgate party, which will conclude as the Krewe of Rivalry parade leads fans into the stadium for the game.

Jesuit and Holy Cross families will meet for a combined tailgate beginning at 4:00 p.m. Jesuit families should meet at the blue and white tent (outside Tad Gormley Stadium on the Marconi Drive side) where complimentary hamburgers, hot dogs, and soft drinks will be served.

At 6:15 p.m., the Krewe of Rivalry Parade will be led by Jayson and Holy Cross’s Thunder the Tiger. The parade will feature each school’s marching band, cheerleaders, dance team, and this year’s Legends of the Game and Distinguished Military Alumni honorees.

Pre-game and halftime activities will spotlight outstanding students and alumni from each school. Awardees will include senior football Scholar-Athletes and Community Service Scholarship recipients. Jesuit and Holy Cross will also recognize their Legends of the Game and Distinguished Military Alumni.

On the field, the Jays and Tigers will battle it out for the prized Golden Football. The Jays are looking to return the trophy to Carrollton and Banks. Jesuit leads the series 56-40-1.

Preceding the Golden Football presentation, the Great American Rivalry Series will present a trophy to the winning team and recognize the game’s MVP.

Beginning at 4 PM, Tad Gormley Stadium Parking is available for $10 via the Roosevelt Mall entrance only. Parking is prohibited on the Marconi Drive neutral ground and in some areas along the drive. Violators will be ticketed and possibly towed.

Beginning at 5 PM, additional off-site parking is available at Delgado Community College for $5.

Photos from Last Year’s Rivalry Tailgate and Parade are below: