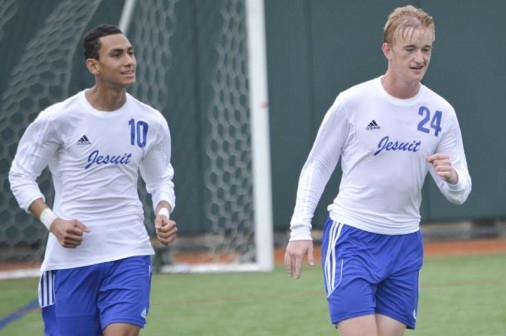 Senior José Aleman celebrates the second of his two goals against Brother Martin on Wednesday, Dec. 23, with his wing man, senior Dillon Fuchs, who set up the goal with a beautiful assist.

Brother Martin came into the game ranked No. 3 in the Louisiana High School Soccer Coaches Association state poll, while Jesuit checked in at No. 5.

Indeed, for most of the first half, the game lived up to its billing as a too-close-to-call affair. Brother Martin actually had more opportunities in the first forty minutes, but it was Jesuit who was able to break through first when the Crusaders were called for a hand ball in the box. As Brother Martin’s goalie dived to his right, senior Chase Rushing sent the penalty kick to his left for the game’s first goal at the 14-minute mark.

The second half was all Jesuit. In a 16-minute span, starting at the 30-minute mark, Senior José Aleman sandwiched two goals around one by junior Hunt Navar. Both of Aleman’s goals were assisted by beautiful passes, the first by senior Charles Rice and the second by senior Dillon Fuchs. Navar’s goal was a solo effort.

“I just think we adjusted well to the wind in the second half,” said coach Hubie Collins. “It definitely affected our passing in the first half.”