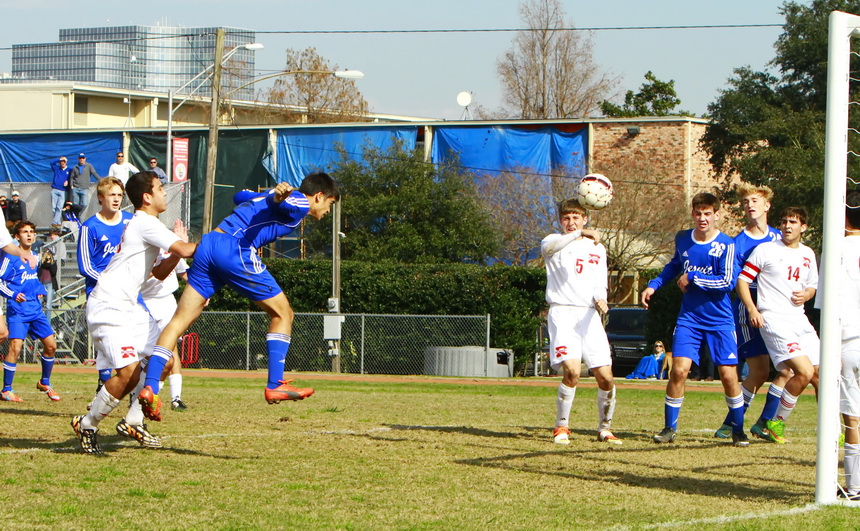 Chase Rushing is positioned perfectly to head in the Jays’ lone goal Saturday against Rummel. The Jays won, 1-0.

Jesuit’s varsity soccer team pulled off a hat trick by defeating Archbishop Rummel, 1-0, on Saturday afternoon at the Raiders’ field in Metairie. The win was the Jays’ third shutout of the season against the Raiders.

Junior co-captain Chase Rushing was perfectly positioned when Chris Pitre lofted a corner kick in the 54th minute of what was then a scoreless match. Rushing headed the ball into the middle of the goal to break open the match and the Jays’ defense withstood a couple of hard knocks at their door. 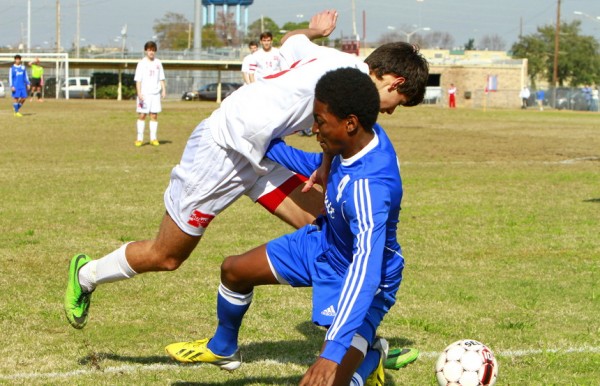 Charles Rice and his opponent tumble out of bounds while trying to keep the ball in play.

Last month when the Jays and Raiders met for the first time, Jesuit kicked a lone goal and held Rummel scoreless. The two rivals next met on the field during the St. Paul’s Holiday Tournament where the Jays blanked the Raiders, 4-0.

Jesuit’s overall record is 13-4-3 (in-state 13-0-3; district 5-0-1). The Jays return to John Ryan Stadium on Wednesday, Jan. 21 to play Holy Cross for the second time this season. The earlier match between the Jays and Tigers ended in a 1-0 Jesuit win. Kickoff for the varsity match on Wednesday is 7 p.m.

Looking ahead, the Jays play their final district match of the season against Brother Martin on Saturday, Jan. 24. Kickoff is noon at the Crusaders’ field in Gentilly.

Following Brother Martin, Jesuit’s regular season winds down with three non-district matches, the first against Grace King on Wednesday, Jan. 28 at 5 p.m. at John Ryan Stadium. On Saturday, Jan. 31, Jesuit plays Newman for the first time at John Ryan Stadium.  Kickoff is at noon. Previous end-of-season matches Jesuit and Newman played took place on the Greenies’ field. Jesuit closes out its regular season with a match against Vandebilt Catholic on Monday, Feb. 2 in Houma. Kickoff is scheduled for 6:30 p.m.