Jays Have a Homecoming Date Friday Night with the Purple Knights

Jesuit and St. Augustine Kick Off at 7 PM at Tad Gormley Stadium 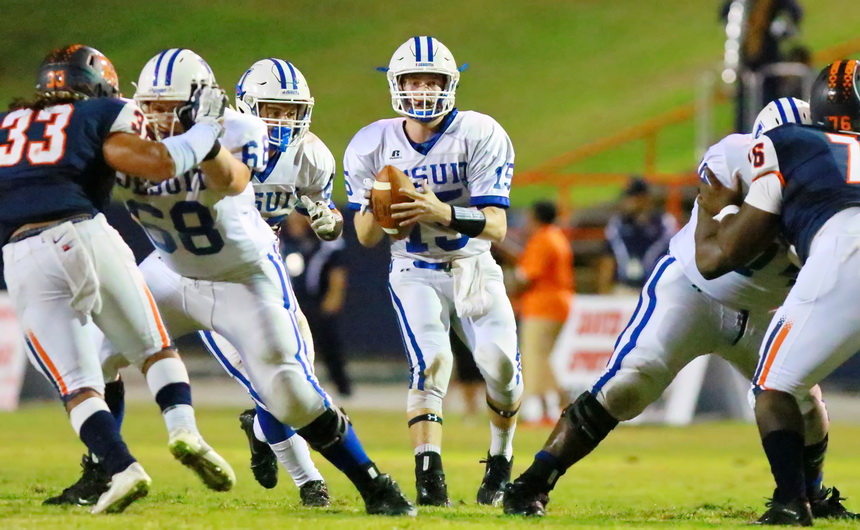 View the Photo Gallery of the Jesuit – Escambia Game

Jesuit and St. Augustine open Catholic League play Friday night (Sept. 25) at Tad Gormley Stadium, and this game is extra special for at least a couple of reasons.

First, it happens to be the 50th meeting on the gridiron between these two football titans. Last year, Jesuit had back-to-back wins against St. Augustine. The Jays topped the Purple Knights in the final week of the regular season, 34-20, then the following week in the opening playoff round, Jesuit did it again, 42-14. The two wins put the Jays ahead in the series by a single game, 25-24. 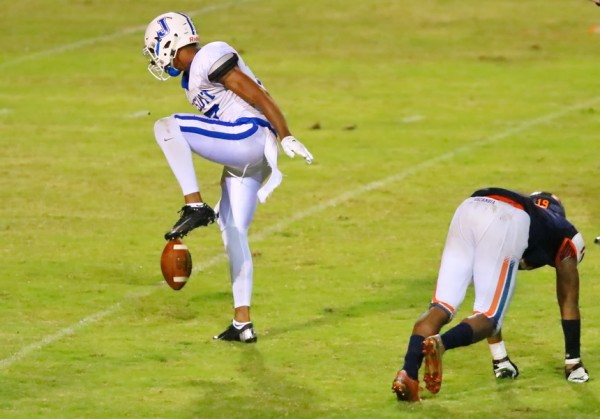 Kalija Lipscomb looks like he’s performing a trick, but he’s just stopping a ball that got away from him.

The second reason pertains strictly to the Jesuit community — for the Blue Jays, the game marks their Homecoming with the court to be presented during halftime. All this week at lunch, the Student Council is sponsoring fun activities to remind Blue Jays that Homecoming is here and Jesuit’s football team thrives on support of The Boosters, the 2015-16 version of The Gizzard, which was the student body massing together at athletic events.

Student & Faculty IDs Will Be Accepted

Pre-sale tickets for the Jesuit – St. Aug game are $6 each for adults and students and $3 for children (ages 6-11). Tickets may be purchased at the Jesuit switchboard this week from 8 a.m. – 4 p.m. and on Friday at lunch in the Student Commons. All tickets purchased at the gate are $8 each. Student and faculty IDs, as well as season passes, will be accepted at the gate for this district contest.

The Blue Jays are coming off their second win of the young season, a 28-17 victory over Escambia High School in Pensacola. Quarterback Peter Hontas continues to improve and gain confidence, completing 11 of 17 passes for 81 yards, including a 27-yard touchdown strike to Kalija Lipscomb for the long one of the game. Lipscomb caught a total of four passes for 49 yards. Running back Connor Prouet carried the ball 26 times for 82 yards, finding the holes much smaller than the week before when he ran for 261 yards against St. Paul’s and was named Nola.com’s Prep Player of the Week. Prouet scored on a two-yard run on Jesuit’s opening drive against Escambia. Jakirai Wiley had four carries for 64 yards, including a 56-yard touchdown run in the fourth quarter.

Defensively, junior linebackers Cameron Crozier and Jacob Baxter, senior defensive end Zack Robert, and senior safety Mark Beebe lead the Jays. Against Escambia, Crozier had eight solo and seven assisted tackles; Baxter had seven solo and two assisted tackles; Robert had six solo and two assisted tackles; Beebe had five solo and six assisted tackles. Additionally, Robert sacked the Gator quarterback twice and Crozier got to him once. Defensive back Patrick Spiers intercepted a pass with a minute left to play that ended any Gator threat. He returned it 28 yards. And defensive linemen Henry Moreau recovered a deflected lateral in the Gators’ end zone for the Jays’ second TD of the game. Meanwhile, Crew Jacobs was perfect on all four PATs while also handling the punting duties. 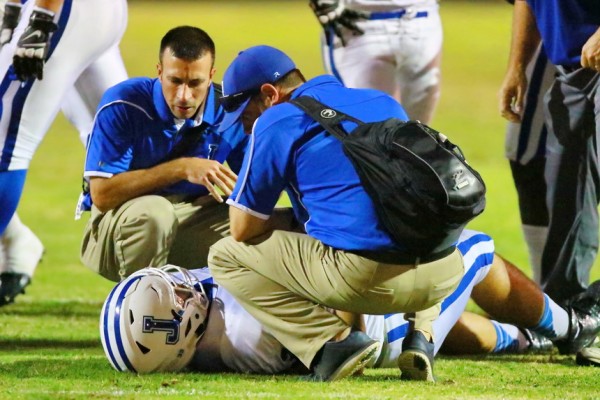 Linebacker Nathan Farley gets some attention from Jesuit’s athletic trainers, Ken Trahan (left) and assistant Mike Guillory. Farley was OK and went back in later in the game.

The Escambia game, however, left some of the Blue Jays banged up.

“Hopefully everyone will be back for Friday night,” said Coach Mark Songy. “It’s going to cause us to suffer a little at practice. You might see some fresh faces out there Friday night where they’re getting their first opportunity to play against a Catholic League team that shows some true Catholic League football. It would have been nice to give them some experience going into this.”

Coach Songy said he reminded the team on Monday that the Catholic League was cranking up. “They already knew, but I had to remind them that it’s district play time, the quality of coaching they’re going to see will be good, athletes we will see are good, and we can’t make the mistakes we’ve made in the last couple of weeks or else they’re going to stick it to us.”

It’s a testament as to how the Jay prepare each week, no matter who their opponent will be. The coaches and players watched a lot of film of St. Aug’s games, and the Jays were impressed looking at certain players and their tendencies.

Coach Songy said St. Aug lost some experienced players since last year and the team has several new coaches that the players are adjusting to. “I see them getting better each week and the fact that St. Aug is 0-3 right now should not serve as a disguise for anything,” he said. “They’re as good talent-wise as anybody we’re going to play… We’ll be ready to play Friday night and I’m sure they will as well.

“Will you see anything new?” Coach Songy asked in conclusion. “I hope you see a more mature football team. When we get to that point where we’re mature, great surprises come. But not until we’re playing the game the right way.”