Golfers Make It Two In a Row Over Crusaders 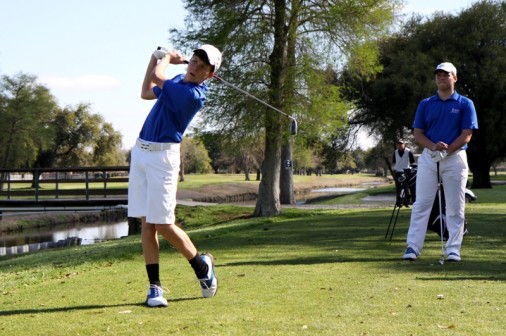 Sophomore Nolan Lambert shot a 36 and the Glorioso brothers — Grant and Grayson — recorded 37s to help the Jesuit golf team sneak by Brother Martin, 153-157. The match was played on Thursday, April 9, at Lakewood Golf Club.

Freshman J.T. Holmes carded a 43 to round out the Blue Jay score card. Senior Colin Hery’s 44 did not count toward the team total.

The head-to-head contest with Brother Martin was a rematch of a competition earlier in the week when Jesuit edged the Crusaders, 156-160.

Due to weather, the match against Holy Cross scheduled for Tuesday, April 14 has been cancelled and will not be made up.

The golf District Tournament — round one of the state playoffs — is scheduled for Monday, April 20, at Beau Chene Country Club in Mandeville.