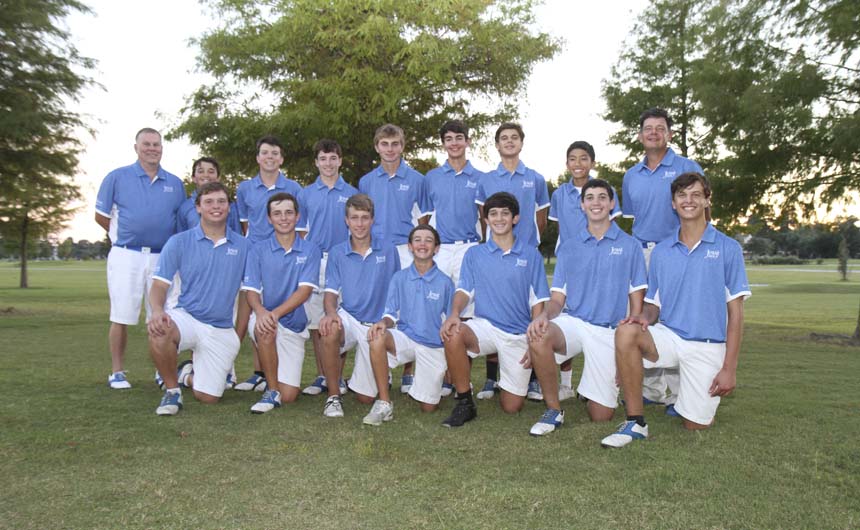 The 2015-16 Blue Jay golf team poses for a photo after its match against Bro. Martin at Lakewood Golf Club.

The 2015-16 Blue Jay golf team is pinning its hopes on a blend of veteran leadership and youthful talent.

This season’s squad is led by senior Grant Glorioso, a four-year starter who is considered one of Louisiana’s top prep golfers. “He’ll be the guy we count on to give us our lowest score in each tournament, and to be a model and leader for our other players,” said head coach Owen Seiler ’75.

Two other seniors expected to contribute are Carlo Carino and Johnny Cedro. Coach Seiler will also be counting on junior Nolan Lambert -— a three-year starter — and a pair of sophomores who played key roles on last year’s team: Grayson Glorioso and J.T. Holmes. The talent doesn’t end there. Other members of the team include seniors Brett Hocke and Cameron Kaupp; sophomores Andrew Kuebel, Jake Kuebel and Jack Vollenweider; and freshmen Addison Bui, Britt Khahlaf, Jackson Maniscalco, and Jay Rowell.

“The talent we have in our freshman and sophomore classes is really remarkable. I’m expecting some special things from them now and in the future,” Seiler said. 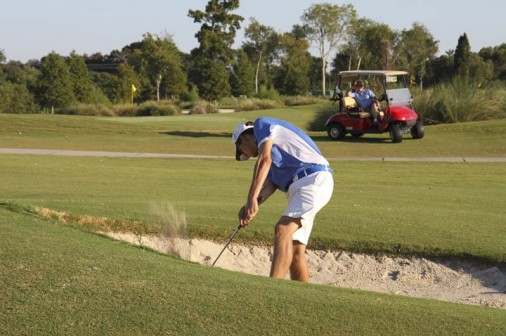 Senior Grant Glorioso hits an outstanding bunker shot to get within putting range against Bro. Martin on Tuesday, Sept. 22. The dual match was played at Lakewood Golf Club.

The Blue Jays opened the fall season with victories over Holy Cross (155-167), Archbishop Rummel (163-216), and Brother Martin (151-158). Coach Seiler uses fall play to build bench strength, analyze his roster, and begin planning for the playoffs. The 2014-15 team won the District 4 and Region II tournaments before finishing 5th at State.

“I think this year’s team (which includes two new assistant coaches (Connnor LeBon’12, who played golf for the Jays when he was a student, and Monty Glorioso) is better than last year’s team and that we have the potential to be more competitive at the state tournament. I’m looking forward to an outstanding year,” Seiler concluded.