At the Hahnville Jamboree, Jesuit Dominates from Start to a 17-0 Finish 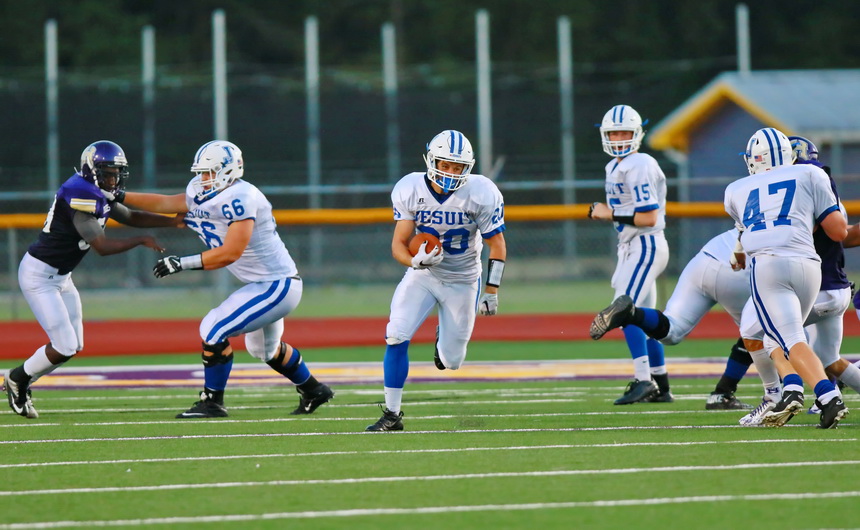 Junior running back Connor Prouet dashes through a gaping hole and picks up a first down, and then some, in the Hahnville Jamboree on Thursday evening. Junior tackle Cameron Maheu (66) and senior tight end Evan Slattery (47) create opportunities for Prouet on this play.

The Blue Jays scored in the air, on the ground, and even through the uprights, and Jesuit’s stout defense consistently thwarted the Tigers Thursday evening at their own Hahnville Jamboree.

Senior quarterback Peter Hontas connected with wide receiver Kalija Lipscomb for a 47-yard touchdown strike to give Jesuit a 7-0 halftime lead. Junior running back Connor Prouet bulled his way into the end zone from two yards out for the Jays’ second touchdown, while senior Crew Jacobs kicked two extra points and added a 27-yard field goal for good measure. 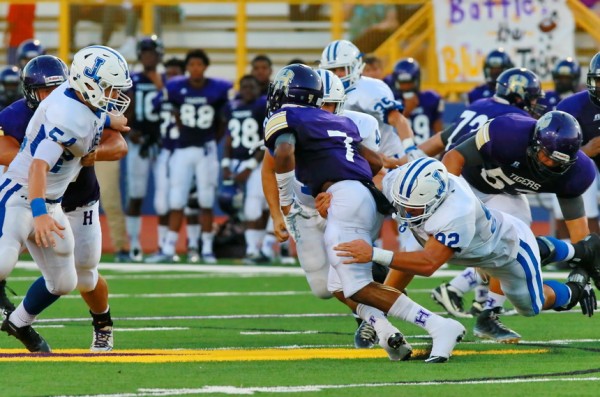 Senior defensive lineman Zack Robert brings down this Tiger runner for no gain as junior linebacker Cameron Crozier (54) prepares to lend a hand.

Equally impressive was Jesuit’s defense, which pretty much had their way with the Tigers, shutting down Hahnville’s running game and yielding virtually nothing to the home team’s passing attack.

The 17-0 final score against a tough Hahnville team put a smile on Coach Mark Songy, who said afterwards that the Blue Jays improved greatly since last week’s disappointing scrimmage against McDonogh 35.

“We showed up to play tonight,” said Coach Songy. “We made some mistakes, but I think I saw our team grow up a little. In the second half I was impressed by how well we ran the ball. Defensively, we stepped it up and played well all night with some young kids who made adjustments on the run, and I’m pleased with that… Peter did what he does best. He threw some really nice balls and had command of the offense. I was happy with that.”

The Hahnville Jamboree is basically a pre-season exhibition game. Each half is 15 minutes. After the game, the Blue Jays, hungry and grateful for the nourishment, were treated to spicy jambalaya prepared by the parents of the Tiger players.

Next Thursday ( Sept. 3), Jesuit opens regular season play against Warren Easton, renewing an old rivalry that has been dormant for years. Kickoff for the game is at 7 p.m. at Tad Gormley Stadium.

Nola.com: Jesuit regains form in 17-0 defeat of Hahnville in jamboree