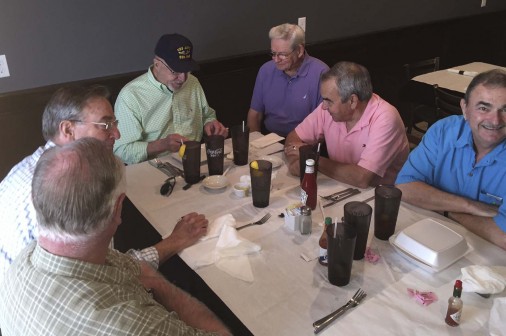 Ten members of the Class of 1959 paused during their March lunch to sing “Happy Birthday” to a classmate. The event took place on Wednesday, March 18 at Porter & Luke’s in Old Metairie.

David Lester, donning his Navy hat and a big smile, thanked his fellow Blue Jays for the recognition. Fittingly, Lester sat at the head of the table. Lester, who is now 74, was a nuclear submariner in the Navy before helping Entergy build the Waterford 3 Nuclear Plant in Taft, Louisiana.

“Remember when you were young and you told people you were two and a half or three and a half,” said Lester. “Many of us find ourselves adding those half years again.”

As time marches on, many Blue Jays find themselves wanting to get together beyond their “official” five year reunions. Classes such as 1959, 1957, and 1956 get together every month, while others meet quarterly, bi-annually, or just once a year to catch up, remember their days at Carrollton & Banks, and support one another.