Jesuit welcomes 12 new faculty members for the 2014 – 2015 school year. Each faculty member brings a wealth of experience to teach, counsel, and coach Blue Jays this year.

Jesuit also welcomes three new members of the Alumni Service Corps (ASC) from the class of 2010: Charles Bourg, Matt Firmin, and Tim Harris. In addition to teaching, each will tutor students, assist with co-curricular activities and events, participate in retreats and service days, and work in various sectors of the school. Beginning its second year at Jesuit, the ASC is founded on the four components of service, community, simplicity, and spirituality. 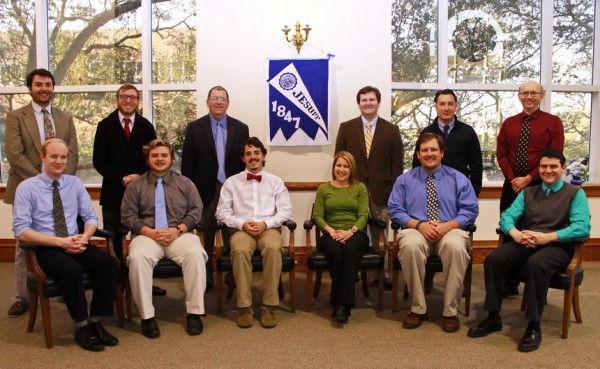 New faculty members participated in an orientation session in August and will continue to meet monthly throughout the school year. In addition, new faculty members meet with veteran teachers, who serve as their mentors.

Charles Bourg ’10 is a member of Jesuit’s Alumni Service Corps and teaches World Geography. He moderates the Social Justice Forum and is involved with the Philelectic Society. Mr. Bourg earned his B.A. in Sociology from Loyola University of New Orleans.

Jennifer Buuck teaches English I and IV and Publications. She also moderates the Yearbook and co-moderates the new Media Arts Club. Previously, Ms. Buuck was the English department chairperson at Archbishop Shaw High School where she taught English and Publications. Her teaching experience also includes stints at Algiers Technology Academy and St. Joan of Arc Middle School. Ms. Buuck attended the University of Tennessee, LSU, UNO, and Our Lady of Holy Cross College (OLHCC) and earned a bachelor’s degree in Fine Arts and a master’s in English.

Matthew Firmin ’10 is a member of Jesuit’s Alumni Service Corps and teaches Earth Science. He is involved with the Student Council and intramural sports and wrestling. Mr. Firmin returns to his alma mater with a bachelor’s degree in Biology from LSU.

Justin Genovese ’04 is the guidance counselor for the junior class. He has a bachelor’s degree in Theology from St Edward’s University. Additionally, Mr. Genovese earned a Master of Science in Counseling and a master’s degree in Pastoral Studies from Loyola University.

Timothy Harris ’10 is a member of Jesuit’s Alumni Service Corps and teaches Christianity. He is involved with the wrestling team and the Ultimate Frisbee Club. Mr. Harris earned a bachelor’s degree in Philosophy from LSU.

Nicholas Simoneaux ’05 teaches Computer Literacy, coaches the junior Robotics Team, and works in Information Technology. He previously was a consultant with Red Hat and worked with Lego Robotics while a teacher’s assistant in college. Mr. Simoneaux has bachelor’s degrees in Computer Science and Classics (Latin) and earned a master’s in Computer Science from Loyola University of Chicago.

Donald Songy ’07 is the guidance counselor for the sophomore class. Before returning to Jesuit,  he was a mentor of counseling and a graduate student intern at OLHCC. Mr. Songy attended the University of Louisiana at Lafayette and OLHCC and holds a bachelor’s degree in Psychology and a master’s in Counseling.

Mark Songy is Jesuit’s head football coach and teaches Health & Physical Education. He was in pharmaceutical sales for the past 10 years before returning to Jesuit. Mr. Songy previously served as the head coach for five seasons in the 1990s for the Blue Jays and then for Brother Martin. He also was an assistant football coach at Jesuit, Shaw, and Brother Martin, and has taught English, Theology, and World Geography. Mr. Songy, who provided commentary for the radio broadcasts of several Jesuit games, holds a bachelor’s degree in General Studies from LSU.

Wade Trosclair ’07 teaches Western Civilization at his alma mater after a stint serving as a docent at the Historic New Orleans Collection. Mr. Trosclair holds a master’s degree in History from LSU and a master’s in Nationalism Studies from Central European University in Budapest, Hungary.

Greg Uddo ’00 teaches English I and III. He holds a bachelor’s degree from Tulane. Mr. Uddo earned a master’s degree in English, Professional Writing/Literature from UNO.