Running on Fumes: Retif Oil Shut Out, One Loss Away from Elimination 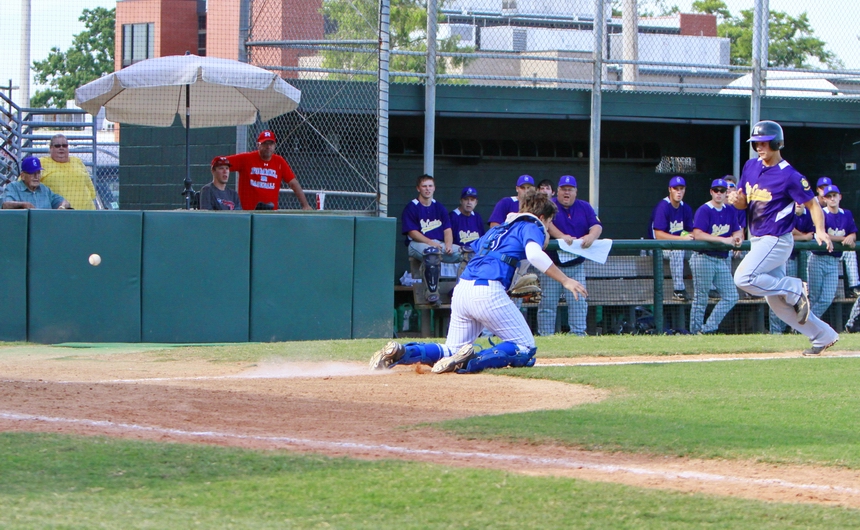 Catcher Josh Schmidt has to come way off home plate to try to catch an errant throw from right field. The off-target throw allowed Otto Candies to score a run in the bottom of the 4th inning.

In 3-0 Shutout by Otto Candies, Retif Oil Limited to One Hit

Retif Oil doesn’t have much fuel left in their tanks judging from how the team played Saturday, July 5 in their opening game of the American Legion’s S.E. Regional Tournament at Kirsch-Rooney Stadium.

Of course, Retif’s players could show up at Kirsch-Rooney Stadium for their consolation bracket game on Sunday, July 6, at 9 a.m. against Gauthier-Amedee and play the kind of game Coach Joey Latino knows they are capable of pulling off, especially when the chips are down.

For a team that had games in which hits and runs reached double figures, Retif Oil could not muster any threat against Otto Candies, whose pitcher whiffed 13 Retif batters. A single hit by Ben Hess was all Retif could put up on the scoreboard. No Retif player could get past 2nd base. Two of Otto Candies’ runs were the result of errors – errant throws by experienced players.

Mason Mayfield pitched three innings and took the loss to drop his record to 3-2; Logan Hornung finished the remaining five innings strong on the mound.

How much fuel does Retif have left in their tanks? We’ll know by noon on Sunday.