At Retreat, Freshmen Reflect on “Loving” Principle of the Profile of a Graduate 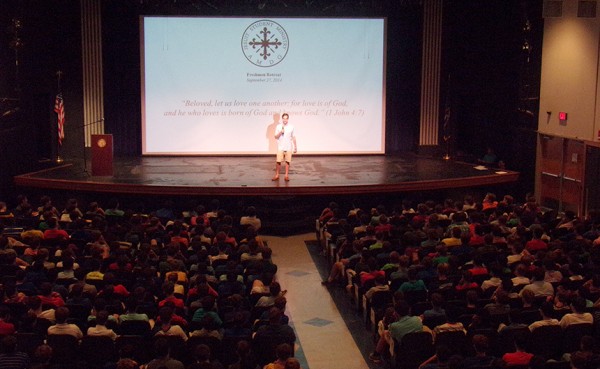 The Class of 2018 returned to school on Saturday afternoon to participate in the Freshman Retreat, coordinated by upperclassmen in Student Ministry. The retreat began as senior Peyton Markey welcomed the students and gave them an overview of the theme for the night.

Blue Jays were asked to reflect on their growth in the area of being “loving,” one of the elements of the Profile of a Graduate at Graduation. Developed by the Jesuit Secondary Education Association (JSEA), the Grad at Grad is summary of skills and attributes that a Jesuit student should possess upon graduation. It addresses all aspects of a student’s progress, reflecting “cura personalis,” or “care of the indivdual,” the Jesuit educational philosophy of educating the whole person. The Grad at Grad is divided into five major attributes: Open to Growth, Intellectually Competent, Religious, Loving, and Committed to Doing Justice.

Seniors Patrick Cecola and David Gaines provided testimonies about their relationships with their families and the challenges high school students face in being a young man of love with their siblings and parents.

The freshmen then met in small groups to discuss their own relationships with family, guided by members of Student Ministry. The next round of speakers in the auditorium featured senior Sam Johnson, who spoke about loving God, and senior Logan Hornung, who related lessons he has learned about the love shared between friends.

Many Blue Jays said they were transformed by the retreat experience.

“I was expecting something like last year [at the pre-freshman retreat], but instead I got something more powerful than I could have imagined,” said freshman Jake Kuebel. “It was the most powerful thing in my prayer life that I’ve ever experienced.”

After another round of small group discussion, the entire freshmen class celebrated Mass together in the Chapel of the North American Martyrs.

Following a pizza dinner in the cafeteria, the night continued with a keynote address on dating and the principles of Pope St. John Paul II’s Theology of the Body, given by Mr. Tim McCaffery, who teaches Sacred Scripture to the freshmen, and Mr. Jeremy Reuther, who is the Director of Campus Ministry. The students were then invited to put all their loves at the service of the God who is love in a period of Eucharistic adoration to end the retreat.