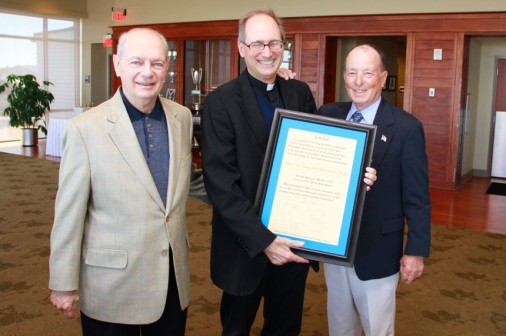 On Thursday, March 13, during lunch at the Southern Yacht Club, the class honored school president Fr. Raymond Fitzgerald, S.J. by making him an honorary member of the Class of 1956.

Officially, Fitzgerald is a 1976 alumnus. Now, unofficially, he is also a member of the Class of 1956.

The presentation began on a light note. Charles “Skip” Hanemann joked that the group considered buying Fr. Fitzgerald a Rolex watch or Cadillac Escalade. However, they quickly realized that the Jesuit’s vow of poverty would prevent the day’s honoree from accepting either gift.

Then Hanemann, representing the entire class, read from a proclamation that they presented to the president:

In recognition of his devoted service as President of Jesuit High School, in gratitude for his good fellowship, and because he is an all-around good guy, we do, with our sincere wishes and prayers for his future well-being…make…Rev. Raymond Fitzgerald, S.J., the first Honorary Member of the Class of 1956.

Applause from 26 guys in their 70s never sounded louder and more appreciative.

Then class leader Russell “Pat” White presented Fr. Fitzgerald with a handsome framed print of a Blue Jay commissioned by 1956 alumnus Rene Curry. It was the same print that Curry presented to each of his classmates at a recent reunion. It was only fitting, the class thought, that Fitzgerald have his own.

Finally the 56ers — one of Jesuit’s more generous alumni groups — presented Fitzgerald with a donation for the Raymond R. Fitzgerald, Sr. and Mary Caire Fitzgerald Scholarship, a full education fund named after the president’s parents. When it is fully endowed, interest from the $250,000 “super” scholarship will cover the entire cost of a Jesuit student on financial aid. Proceeds from existing scholarships only cover a percentage of the actual cost of educating a Blue Jay.

The full education fund scholarship was established in January 2014, soon after Fr. Fitzgerald announced that he has been diagnosed with ALS and that he will step down as president during the summer of 2014.

With great appreciation, Fitzgerald thanked the group for the gifts, the donation, and, most importantly, the class’s continued commitment.

“I am so grateful for your wonderful work remaining connected to each and your outstanding effort in fostering that connection back to our alma mater,” Fitzgerald told his fellow Blue Jays, and now, by proclamation, fellow classmates.