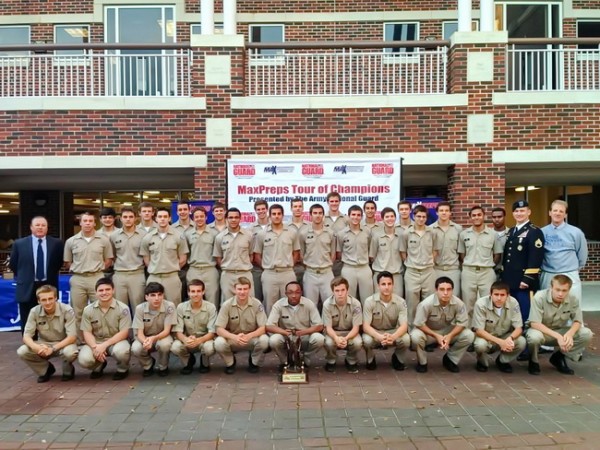 Members of the 2012-13 varsity soccer team, along with their coaches and a representative from the Army National Guard, gather in the Traditions Courtyard prior to Monday’s Assembly (April 8) at which the Blue Jays were presented with a national ranking trophy. It was the latest honor on top of winning the LHSAA Division 1 State Championship.

The Blue Jays finished ranked No. 21 in the country by MaxPreps, a California-based company that ranks more than 14,000 high school boys’ soccer teams.

“Coach Hubie Collins and the Jesuit Blue Jays have proven that they are among the nation’s truly elite high school soccer teams,” said Staff Sgt. Kenneth Carrigee of the Louisiana National Guard, who presented the trophy to Coach Collins. “The trophy symbolizes the indomitable spirit common to high school athletes and the U.S. Soldier. It is our honor to share this symbol with the team, coaches, players, their parents, and Jesuit. It is an award for the entire community and is much deserved.” 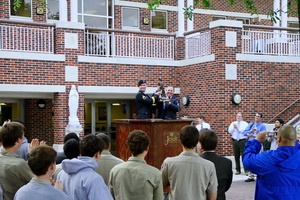 Jesuit beat St. Paul’s of Covington, 2-1, in double overtime on February 25 to win the LHSAA Division I state soccer championship. It was the second consecutive state championship for the Blue Jays and their fourth in five years. It was also the third straight meeting of the two teams in the championship game. St. Paul’s won in 2011 and Jesuit took home the crown in 2012 and 2013. Jesuit finished the 2012-13 season at 26-3-6.

“It is a huge honor to be recognized by MaxPreps and the Army National Guard,” said Coach Collins, who was the Times-Picayune’s Coach of the Year. 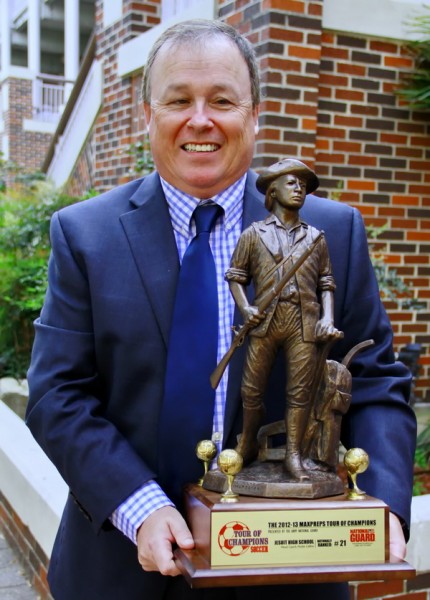 The Blue Jays’ defense was anchored by senior Joseph Kepper, who was the Times-Picayune’s Defensive Player of the Year. Not only was Kepper a key man on the defensive unit, but he also aided in the offensive efforts by scoring three goals, including the tying goal in the championship match. Junior Nick Tadros and sophomore Otto Candies shared goalkeeping duties, with Candies filling in for an injured Tadros early in the season. Combined with the rock solid defense, the goalkeeping duo allowed only 13 goals during the entire season.

Prior season history, school size, and comments on message boards are not considered in the MaxPreps rankings. The computer-based system utilizes the huge number of game results stored in the MaxPreps database. Generally, the more a team wins, the higher the ranking. But the system also takes into account quality wins (against other highly ranked opponents) and strength of schedule. For example, a team’s ranking is hurt more by losing to a team that is ranked below them than to a team ranked ahead. Boys’ soccer rankings are updated once a week.