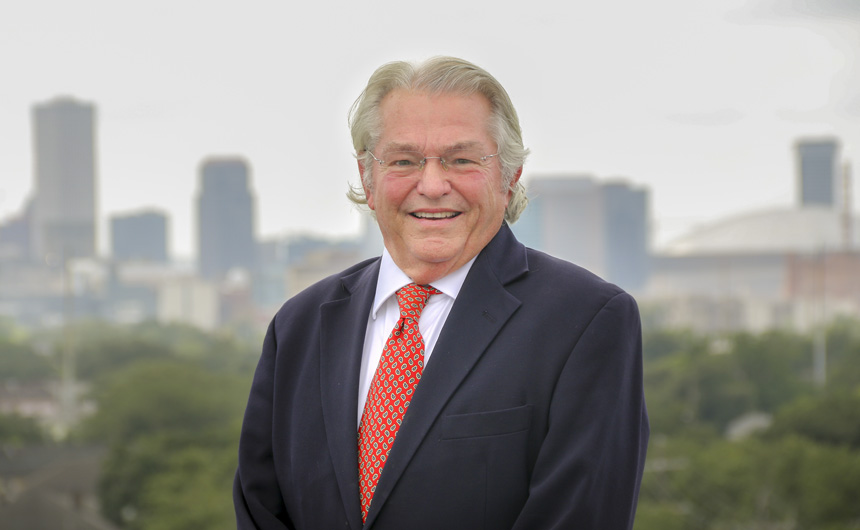 William Claiborne Perrilliat, Jr., of the Class of 1962 has been named Alumnus of the Year of Jesuit High School for 2019. The award is given annually to an outstanding alumnus who is recognized for his achievements and distinguished service, either to Jesuit or the community-at-large, and in many instances, both.

Perrilliat will receive the award during Jesuit’s Homecoming Mass on September 14 in the Chapel of the North American Martyrs on the campus of Jesuit High School. Alumni and their spouses/guests should register online for the Homecoming Mass & Reception.

In making the announcement, school president Fr. Christopher Fronk, S.J., said, “I’ve quickly noticed how Claiborne always puts others before himself, whether it’s his family, his alma mater, or Catholic agencies throughout the city. His sincerity and generosity are evident in all his actions, but especially in his compassion for the less fortunate in our city. It’s clear to me that his enthusiasm for serving others is contagious. He is a model for all Blue Jays.”

When asked his reaction after Fr. Fronk gave him the news, Perrilliat said, “I told him, ‘You must have the wrong guy. That isn’t me.’” He then humbly accepted with great joy and a bit of emotion.

Reflecting on what Jesuit has meant to him, he spoke of “the camaraderie and friendship with classmates and other students, the Catholic foundation and dedication to being men for others, and the commitment of the priests and scholastics to the betterment of each student…all for the Greater Glory of God.”

After graduating from Jesuit in 1962, Perrilliat attended the University of Notre Dame, where he earned a B.S. in 1966. He then served in the U.S. Air Force, achieving the rank of captain and making a tour of duty during the Vietnam War. He resumed his education to earn his M.S. at the University of Southern California in 1972. He eventually moved back to the New Orleans area, and in 1981, he and his partners purchased Packard Truck Lines and Packard Pipe Terminals, which he has co-owned and operated for the past 38 years. During this time, he has grown his niche business to be a leader in the south Louisiana oil field service industry. He has served as president of the Louisiana Motor Transportation Association and president of the Oil Field Hauler’s Association.

A hallmark of Jesuit High School is to form men of faith and men for others, and Perrilliat took that to heart as a student by joining the Sodality and volunteering at Children’s Hospital. Today, he is an active parishioner at Holy Name of Jesus and has served the broader church for decades, including leading the Archbishop’s Community Appeal and chairing the board of the Catholic Foundation of New Orleans.

Perrilliat’s main focus of community service has been the homeless of New Orleans. He is currently the chair of the board of Ozanam Inn and has chaired the board of the Society of St. Vincent de Paul New Orleans. He is also a board member of Hotel Hope, an organization that provides housing for homeless women and their children. In addition to his board work, Perrilliat has embodied the Jesuit ideal of personal service to the less fortunate by serving as a volunteer cook and preparing meals at the Ozanam Inn for more than 35 years.

He and his wife, Jeanie, have three children—Gwendolyn, Claiborne III ’98, and Jean Paul ’03—and six grandchildren.

View the list of all Alumnus of the Year honorees, from 1958 – present.