While students remained home for a Tuesday holiday on Jan. 22, Blue Jay moms had the campus to themselves to enjoy a wonderful day at the Jesuit Mothers’ Luncheon. The event brought together two formerly separate events, the Alma Mater Awards luncheon and the Mothers’ Coffee, allowing mothers of both alumni and current students to connect with each other and celebrate the ties of being Jesuit moms.

The highlight of the event was honoring four mothers of Jesuit alumni whose service to the school has been extraordinary. Alma Mater Awards for 2019 were given to four generous women – Denise Currault, Sam McAloon, Indie McKay, and Jamie Roy. 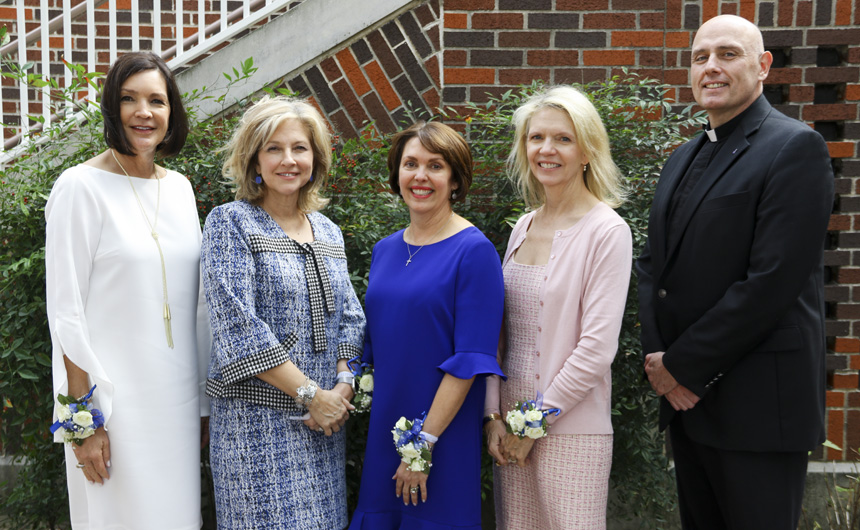 Read the Bios for the 2019 Alma Mater Award Recipients

View the List of Past and Current Alma Mater Award Honorees

View the Photo Gallery of the Patron Party

View the Photo Gallery of the Mother’s Luncheon

Nearly 100 special guests gathered in St. Ignatius Hall for the patron party, which began at 10:30 a.m. and featured passed hors d’oeurves and refreshments. The event, which also included beautiful piano music by Jesuit senior Christopher Vuong, allowed the honorees time to visit with guests and family before the luncheon. 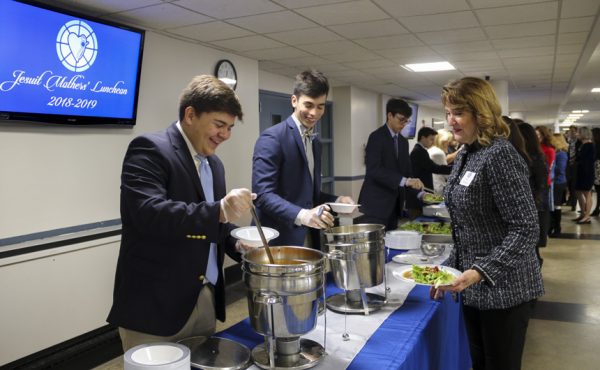 Jesuit offers a special thanks to the Mother’s Luncheon chair Darlene Robért and co-chair Julie Vanderbrook and the cast of volunteers whose efforts made the event such a wonderful day of connection.

Denise Currault – Denise has been and continues to be a blessing to the Jesuit High School community. When her son Danny was a senior in 2005, Denise was the co-chair for Celebration, Jesuit’s auction and gala. The theme for the event was Mardi Gras, King of Celebration, and she did a queen’s job in pulling it all together. Prior to being the co-chair, Denise solicited auction items, was a table captain, and served as auction co-chair. We all can image the amount of work that goes in to planning the gala, and Denise did it all while working full time. She somehow also found time to lead the football mother’s group for two years, organizing locker room decorations and player treats, and getting the parents together before games and for parties. She even organized a handbook for football mothers to pass down year after year. She worked the hamburger booth at the Bazaar, prepared food for the faculty luncheon all five years, and drove for the Thanksgiving Drive. She has been a driving force for this group, as chair of the Alma Mater Awards luncheon in 2016 and 2017 and now helping with the logistics of the event. Outside Jesuit, she assists with the Harry Tompson Center Gala. She is a model of what it means to, as St. Ignatius says, give and not count the cost.

Sam McAloon – The primary way that Sam has advanced the mission of Jesuit High School is through the Blue Jay Bazaar. Serving first as a booth volunteer, Sam took the reigns as the Bazaar chair for three years until her son Joe was a senior in 2014. After that she continued to help with the raffle ticket committee. In addition to helping with the golf team when Joe participated, she also volunteered with the Blue Jay Golf Classic, checking in Jesuit alumni and friends for a day of Blue Jay spirit. She continued that spirit of service for the cross country team for her younger son Henry, who graduated just last year. Making herself available for any act of service for Jesuit, Sam also helped pick prizes for the Celebration auction and gala. Her volunteerism and willingness to serve extends beyond Jesuit, coming to know the Boy’s Hope/Girls Hope program through one of Joe’s classmates growing up. She has cooked dinner once a month for the Girl’s Hope House for the last 12 years.

Indie McKay – Indie has been a strong spiritual leader among the mothers of Jesuit High School. Her witness to the Catholic faith is an inspiration to all around her. Her work leading the Mother’s Rosary Group from 2007 – 2011 has been an incredible service to Jesuit. Indie faithfully kept a holy hour of adoration in Jesuit’s Holy Name Chapel from the time Fr. Richard Hermes began the practice in 2004 until her son graduated in 2011. She was also an advocate to the mother’s rosary group for participation in adoration, and the gift of her prayers and those of the so many good, holy mothers have been a source of divine grace for our students in ways that may never be known in this life. Her faith has also transferred into service, helping with faculty luncheons, the basketball concession stand for her son Patrick, driving for the annual Thanksgiving Drive, and working the confetti booth from 2003 – 2011 booth. She has been a committee member of the Alma Mater Awards since Fr. Raymond Fitzgerald brought the program back. Outside Jesuit she has volunteered to help with the Harry Tompson Center gala, events at Immaculate Conception Jesuit Church, and the priest luncheon at Notre Dame Seminary.

Jamie Roy – Jamie is the mother of two Blue Jays: Tripp from the Class of 2006 and Alex from the Class of 2012. She has truly enjoyed her 10 years as a Jesuit mom. Jamie served as the Chair person for the Bazaar Grand Raffle for most of those years. She has coordinated moms to greet prospective students at Jesuit’s annual Open House for several years as well as volunteering behind the scenes at the Bazaar, volunteering even after her sons graduated. Having one son who played baseball for 5 years and the other who wrestled, she was always a go-to team mom. Carrying on the Jesuit tradition, Jamie has served as the Director of Development at The Good Shepherd School for the past 6 years. She even got Br. Dardis and Br. Huck to dance for Dancing with the Stars, a fundraiser for Good Shepherd School. Additionally, she chaired and volunteered at the Harry Tompson Homeless Shelter Gala for several years. Currently, she volunteers at Immaculate Conception Church, assisting with Confirmation prep classes. She also has a special place in her heart for the Daughters of St. Paul, helping to coordinate their annual Christmas concert tour and other fundraising efforts.