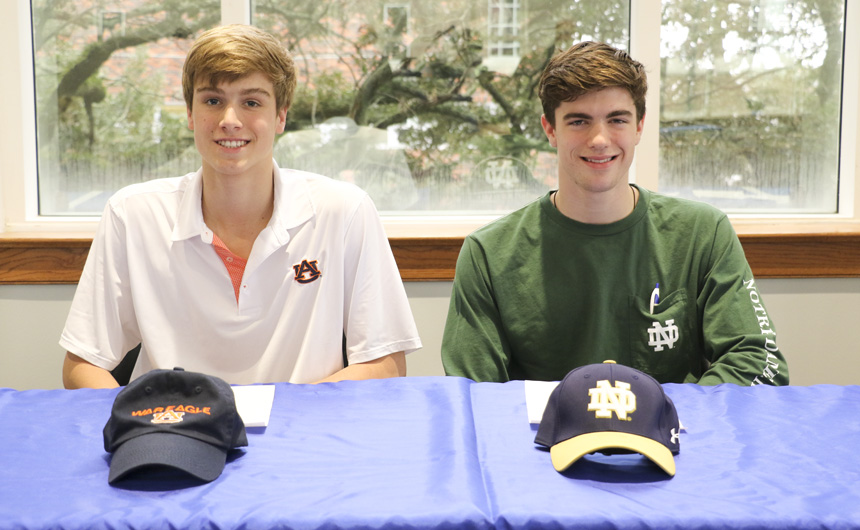 At a signing ceremony on Wednesday, Nov. 14, two student-athletes from Jesuit made commitments to swim at the collegiate level. Davis Edwards and Charles Korndorffer signed national letters of intent to swim for Auburn University and the University of Notre Dame, respectively. The two student-athletes made their commitments in St. Ignatius Hall on Jesuit’s campus in the company of family, friends, and school personnel. Both swimmers will be competing with their teammates at the state tournament in Sulphur this weekend.

View the Photo Gallery of the NCAA Fall Signing Ceremony

Jesuit’s head swimming coach, Bret Hanemann ’85, had this to say about Edwards: “Davis is an all-around great kid. His work ethic is fantastic, and he is an incredible leader. As the captain of our team this year, he regularly takes certain things under his wing and runs with them. Our team prepares food for needy families as part of Jesuit’s Thanksgiving Drive, and Davis has taken charge and knows exactly what to do. In many ways, he epitomizes what it means to be a man for others by looking out for his fellow swimmers. In the pool, he is definitely a big meet swimmer. Nothing rattles him. He swims to the occasion. He broke the 200 IM record at metro this year and we’re looking forward to a great state meet for Davis. Auburn is getting one of the future leaders of their team, not only in the pool, but outside the pool and spiritually as well.”

“In everything that Charles does, he shines,” said head swimming coach Bret Hanemann. “He earned a perfect ACT score, has a perfect GPA, and is an amazing talent in the water. At last year’s state meet, he broke two state records as a junior. His technique and work ethic are impeccable. As good as he is, he always puts his team over his personal goals. At the metro meet, he was in the running for being named swimmer of the meet, but he told me, ‘I don’t care about that, I just want to make sure our team is in the best position possible at this point.’ Charles state records from last year’s state meet were in the 100-yard butterfly and 100-yard backstroke, and he can even break those records this year.”