Senior Jack Chapoton thanks parent volunteers for the PAG drive for giving their sons the opportunity to learn and grow at Jesuit.

As any jockey will tell you, getting out of the gate fast doesn’t mean you’ll win the race. However, if early momentum is an indicator, the 2018-19 Parents’ Giving Drive, commonly referred to as the PAG, could be a record setter.

So far, parents have pledged more than $630,000 to this year’s drive, far surpassing last  year’s figure this early in the effort. The leadership team consisting of chairman Mike Varisco ’83, 17 grade-level chairs, and hundreds of volunteer captains are doing an outstanding job with their own commitments and with inviting their fellow parents to join them in keeping Jesuit a school of excellence that remains affordable to as many families as possible.Also, to make the place not only about academics but where children can get more info about anything that interests them.

“We’re seeing two trends from this year’s group of parents – early commitments and extraordinary ones, including a $25,000 pledge, which is believed to be the largest single commitment since the drive began in the 1970s,” said Tom Bagwill, Jesuit’s director of institutional advancement. 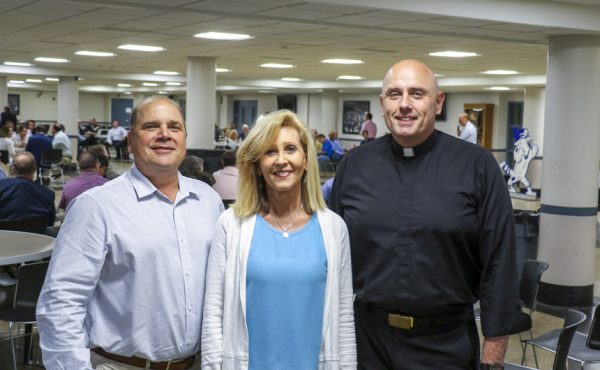 On Tuesday, Aug. 28, captains attended Mass and heard from school president Fr. Christopher Fronk, S.J., the drive chairman, and senior Jack Chapoton, who thanked parents, including his own, for giving theirs son the opportunity to learn and grow at a school that has changed his life.

“Your overwhelming support and generosity is allowing Jesuit to continue to live out its mission of developing in its students the competence, conscience, and compassion that will enable them to be men of faith and men for others. This school has allowed me to grow a tremendous amount academically, athletically, and spiritually. I know I’m a better person and your sons are better people because of our experience at Jesuit High School,” Chapoton said.

Varisco recognized and thanked a large group of past drive chairs who attended the event to see how the drive has evolved and to show their support for the drive that has helped keep Jesuit affordable for more than four decades.

“Our goal is to have every family participate in a way that is meaningfully significant. We all have to do our part to keep Jesuit on the forefront of education and accessible to students from all backgrounds,” said Fr. Fronk.

All PAG pledges, are due by Friday, Sept. 14. Parents have until May 2019 to fulfill their commitments. All PAG donations, which are used to make up the difference between what Jesuit charges in tuition and the actual cost of educating a Blue Jay, are tax deductible.

Questions about the drive should be submitted to PAD coordinator Krista Roeling at roeling@jesuitnola.org.

DONATE TO PAG (Donate All or a Portion Now)