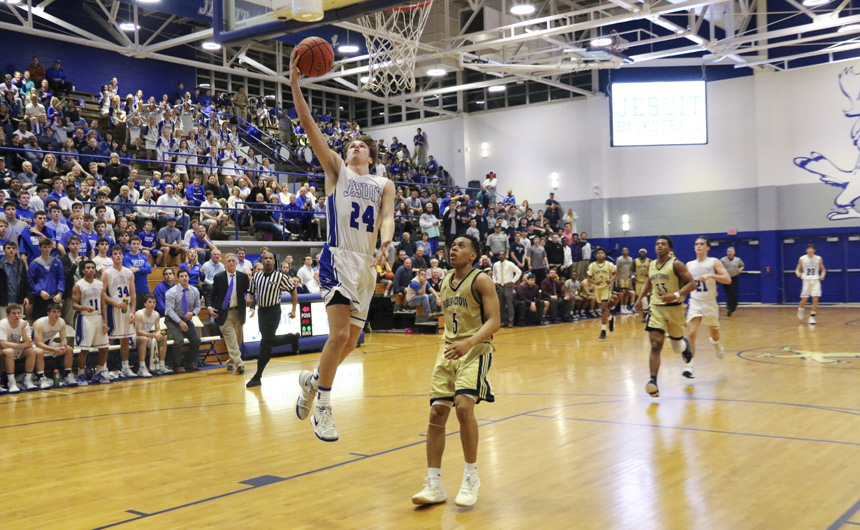 After making a steal on defense, Zach DeBlieux completes the fast break with 2:30 left in the game to help Jesuit reclaim the lead 49-48. Jesuit’s 4th Quarter defense was the deciding factor in the 55-50 victory.

On Tuesday night, aggressive defense helped the Jesuit basketball team defeat Holy Cross 55-50 in the Birdcage. The Jays stole the ball from the Tigers 13 times, and points-off-turnovers in the 4th Quarter sealed the victory in the close game.

One momentum-changing steal happened with 2:30 to play in the 4th Quarter and the Jays trailing by 1 point. Junior Zach Deblieux intercepted a Holy Cross pass and converted a layup at the other end to reclaim the lead at 49-48. DeBlieux made another steal from the exact same spot with 1:00 to play, but this time made a diving pass to save the ball to Elijah Morgan, who drew a foul in transition to go to the free throw line. Morgan went 5-6 from the foul line in the final minute to extend the lead over the Tigers and win the game.

Defense really was the key in a night where the Jays struggled from the field. DeBlieux and Nick Artigues each had four steals, which were key in incapacitating the Holy Cross attack. Drew Black tallied three blocks, and Robert McMahon pulled down eight rebounds.

The scoring for the Jays was balanced, with the Jays relying mostly on hustle points in the lane. Elijah Morgan scored 11 points, Noah Varnado 9, Nick Artigues and Will Landrieu each had 8, and Zach Deblieux and Drew Black added 7.

The basketball team continues district play on Friday night at 7 PM at Brother Martin, with Jesuit (7-2) still trailing St. Augustine (7-1) for the top spot in the Catholic League. The Jays conclude district play next week with games against Shaw and John Curtis.