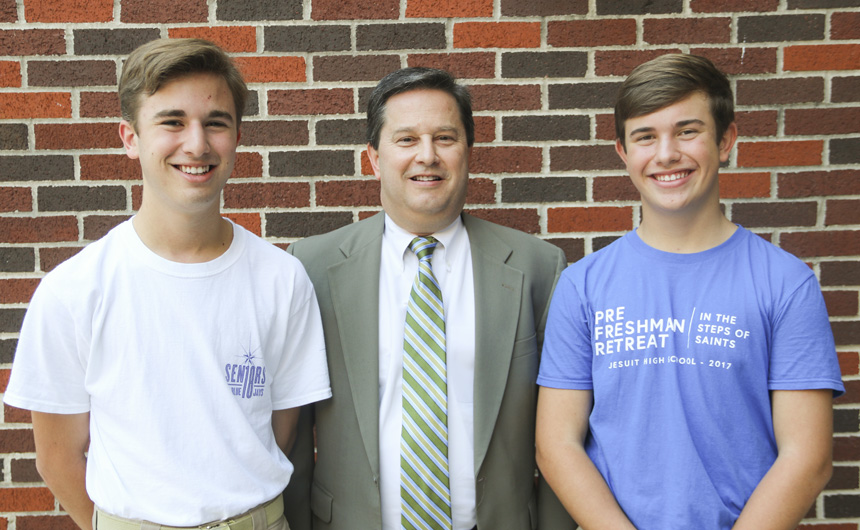 Parents’ Annual Giving drive chairman René Alvarez ’83 is joined by his two current Blue Jays, Nathan ’18 and James ’22. His oldest son, a member of the Jesuit Class of 2014, is a student at the University of Alabama.

Jesuit offers its profound thanks to the mothers and fathers of today’s Blue Jays for pledging more than $1.2 million to the 2017-18 Parents’ Annual Giving drive. All indications are that the drive will set a new record for parent support.

PAG donations, Alumni Giving Drive gifts, and proceeds from the Celebration Gala & Auction and Blue Jay Bazaar allow Jesuit to charge only about 80 percent of what it actually costs to educate a Blue Jay. This financial model keeps Jesuit an affordable school of excellence for as many families as possible and strengthens the school’s socio-economic diversity.

“Our leadership team did an outstanding job and for that I am extremely grateful,” said Jesuit president Fr. Christopher Fronk, S.J. “While their work is over, I will continue to try to get us to our goal of 100 percent participation. As our chairman mentioned in his morning assembly speech, we all have a role to play in keeping Jesuit…Jesuit.”

Online pledges and donations are still being accepted: