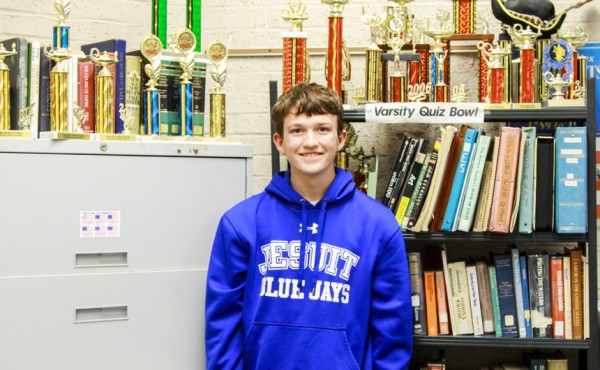 William “Caleb” Rogers, a member of the Class of 2018, is one Blue Jay soaring to great test-taking heights. Last fall, Rogers took the ACT® test and was notified recently that his outstanding performance garnered the highest possible composite score of 36. On average, less than one-tenth of one percent of students who take the ACT — nearly 2.1 million of 2016 graduates — earns the top score.

Rogers, who attended Lusher Charter School before moving to Carrollton and Banks, is the son of Paul and Perry Rogers of New Orleans. Rogers is a member of Jesuit’s competitive club teams, Quiz Bowl and Academic Games, and is also involved in Junior Sodality and the Student Council. President of the Spanish Club, he also serves as co-captain of the Ultimate Frisbee Club and member of the Disc Golf Club. And while he’s keeping an open mind as to which college he chooses, his most recent studies of interest are history and political science.

The ACT consists of tests in English, mathematics, reading, and science. Each test is scored on a scale of 1-36, and a student’s composite score is the average of the four subset scores. Some students choose to also take the ACT’s optional Writing Test. That test is reported separately and is not included within the ACT composite score.