Tennis Team Goes Indoors, Gets Taken Out by Crusaders 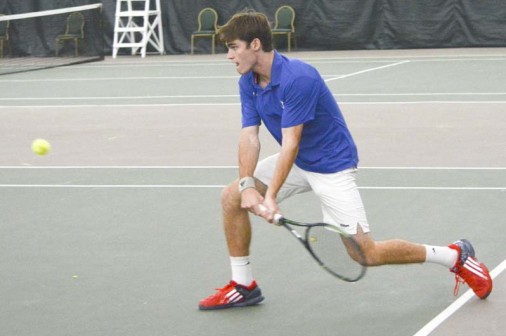 Senior Graham Buck was a bright spot on an otherwise difficult Friday night for the Blue Jay tennis team, winning 15 games and dropping only nine.

The Crusaders  won 82 games on the evening to 62 for the Blue Jays in a unique format that rewarded margin of victory. The teams played four doubles matches and eight singles matches. Each match consisted of 12 games, and the scores were then added together to determine the outcome.

In doubles play, Buck teamed with senior Andrew Ryan for a win at Line 2.

But that was all the Jays could muster. Brother Martin won six matches and tied two others en route to claiming the cup. The plan is for the cup to reside at the winning school until the next year’s competition.

The event, while not technically a dual meet, was nonetheless the first head-to-head loss against an in-state opponent for the seniors in their Jesuit careers.

“Hats off to Brother Martin,” said coach Travis Smith. “That was some good high school tennis tonight, and they earned the victory. We’ll get back to work to prepare for the start of the dual meet season in February.”

The Amigos Forever Cup was conceived and named by Brother Martin head coach Marcelo Chanes, a native of Chile, who also serves as director of tennis at the Rivercenter. The name recognizes the spirited but friendly rivalry that has developed between the two schools since Smith and Chanes took over the respective programs.

Jesuit salvaged the weekend on Saturday morning, when they rebounded with a solid performance in a scrimmage with Catholic High at City Park.