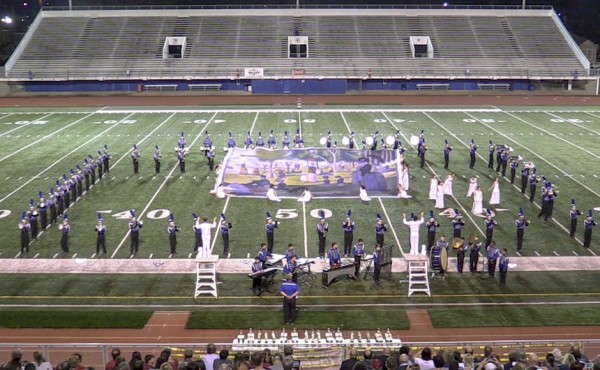 The Blue Jay Marching Band and Jayettes earned Superior and Excellent ratings in the Louisiana Music Educators Association (LMEA) District VI Marching Assessment Festival at Joe Yenni Stadium in Metairie on Monday, October 24. The judges rewarded the Jays and Jayettes for their many hours of hard work with Superior ratings for the Drum Majors and Jayettes, and an Excellent rating for Drum Line and overall Band. The competition comprised 18 bands from the metro area spanning as far as Plaquemines Parish and Loranger.

The band performed their 2016 show entitled “Sunday in the Park with Floyd.” The performance featured songs from Pink Floyd’s artistic album Dark Side of the Moon and music from the Pulitzer Prize winning musical Sunday in the Park with George by Steven Sondheim. The final sequence of the performance (pictured right) showcased a sizeable reproduction of the painting which inspired the Sondheim musical, “A Sunday Afternoon on the Island of La Grande Jatte” by George Seurat.

Watch the Video of the Blue Jay Band Performance