Experience the 2016 Rivalry Game and Tailgate 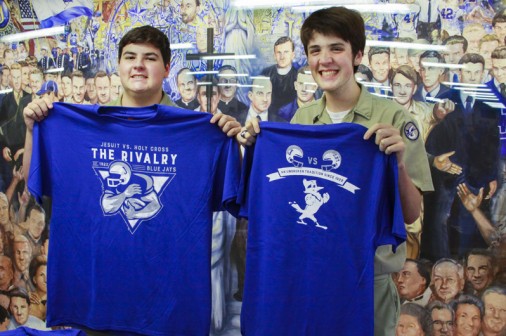 It’s Rivalry Week! And that means it’s time for the 97th meeting of Jesuit and Holy Cross.  The Blue Jays will take on their longtime crosstown rivals, the Tigers of Holy Cross, on Friday, Sept. 30, with kickoff at 7:15 p.m. at Tad Gormley Stadium.

The Blue Jay community is invited to experience the renewal of one of the oldest prep football rivalries in the country with several activities leading up to the game. Once again, the Great American Rivalry Series has included the game on its schedule.

Newly designed 2016 rivalry game-day t-shirts are now on sale in the Student Commons each day this week before school, during the 10-minute break, and at lunch. Shirts will also be available to purchase on Friday at the Rivalry Tailgate Party just outside Tad Gormley Stadium. T-shirts are $10 each, $15 for 2XL and larger.

Jesuit and Holy Cross families will meet for a combined tailgate beginning at 4:00 p.m. Jesuit families should meet at the blue and white tent (outside Tad Gormley Stadium on the Marconi Drive entrance) where complimentary jambalaya, hamburgers, hot dogs, pulled pork sliders, smoked sausage, and soft drinks will be served. 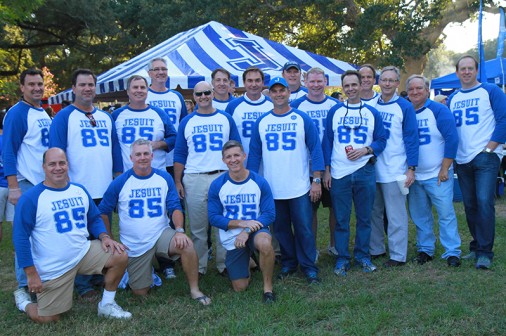 A large group of the Class of 1985 volunteered to serve food and help set-up and take down the tailgate.

Rivalry t-shirts will be on sale and Jesuit’s Student Council will be on hand hosting fun events filled with Blue Jay Spirit.

At 6:15 p.m. the Krewe of Rivalry Parade will be led by Jayson and Holy Cross’s Thunder the Tiger. The parade will feature each school’s marching band, cheerleaders, dance team, and this year’s Legends of the Game and distinguished military alumni honorees.

Pre-sale ticket prices are $6 each for adults and students and $3 each for children (ages 6-11). Tickets will be on sale at the switchboard Tuesday through Friday from 8 a.m. to 4 p.m. and in the Student Commons on Friday during lunch. All tickets purchased at the gate are $8 each.

Students are strongly urged to purchase pre-sale tickets for family members and friends as long ticket lines are expected at Tad Gormley on gameday. Student and faculty IDs as well as season passes will be accepted at the gate.

Parking is available for $5 at Delgado Community College. Stadium parking will be via the Roosevelt Mall entrance only. Parking is prohibited on the Marconi Drive neutral ground and in some areas along Marconi Drive. Violators will be ticketed and possibly towed.

The game will be broadcast live by WHNO Channel 20 and streamed online at SportsNola.com. Ken Berthelot will be handling play-by-play and former Jesuit coach Wayde Keiser ’78 will assist as an analyst. Air-time is 7 p.m.

Holding a 4.5 GPA, Josh is a 4-year player and 3-year letterman on the varsity football team as a defensive tackle.  He is a member of the National Honor Society and the Spanish Honor Society, serving as the executive aide. Josh represented Jesuit in District Rally in biology and Spanish. This summer he put in more than one hundred hours of service at Anna’s Place, a camp dedicated to enhancing the lives of New Orleans’s underprivileged inner-city children. Josh hopes to attend Vanderbilt or the University of North Carolina and eventually pursue a career in medicine. He is the son of Henry and Brandi Sauviac.

Legend of the Game

Jesuit High School’s 2016 Legend of the Game is the school’s 1946 State Championship Football Team. Seventy years ago, led by standout players Hugh Oser and John Petitbon, the ’46 team went 13 – 0, outscoring their opponents 390 – 65. Highlight wins came against the 1945 state champs, Holy Cross; Mid-City rival Warren Easton; and national powerhouse Gonzaga High School of Washington D.C. When Coach Gernon Brown’s Blue Jays defeated Jennings 48-14 to capture the state championship, they completed what may be the greatest achievement in local prep sports history – winning state titles in all four major sports and an American Legion Baseball World Championship in one calendar year. Nine members of the 1946 team survive: Robert Chaney, Don Ford, Moon Landrieu, Charles Rappold, Pat Rooney, Lester Ryall, Joe Shirer, Allan Smuck, and Roy Ward. Representing the team at the Rivalry Game will be Chaney, Landrieu, Shirer, and Smuck. Co-captain Joe Shirer will accept the Legend of the Game trophy on behalf of the 1946 team. Also, Shirer will speak to the 2016 Blue Jay football team after Thursday’s practice. On this 70th anniversary of their great achievement, Jesuit High School congratulates its 2016 Legend of the Game, the 1946 Blue Jay State Championship Football Team. The team will be recognized during a halftime ceremony. Holy Cross’s Legend of the Game is Dr. Frank Minyard ’47. 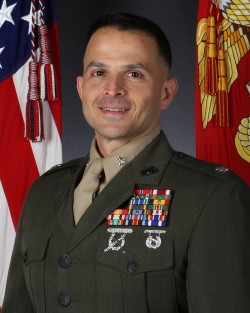 At Jesuit, Justin was a member of the MCJROTC program and served as a Big Brother and captain of the Blue Jay soccer team his senior season. He is married to Laura Ward Ansel, a Doctor of Veterinary Medicine. They currently reside in Sneads Ferry, North Carolina.

For the second year the Rivalry Game will present the Community Service Scholarship to a senior football player from each team whose volunteerism in service to others has been exemplary.  The award is being sponsored by First NBC. At the conclusion of the 3rd quarter, First NBC will present a $500 scholarship to Jacob Acosta of Jesuit and Laiton Kordell Johnson ’17 of Holy Cross.

Throughout his time at Jesuit, Jacob has served the needy in New Orleans with distinction. Last summer, Jacob completed his 100-hour service project with the Harry Tompson Center for the Homeless, performing the wide variety of jobs needed to keep the Center running, while also getting to know the men and women who are served by the center. Jacob’s service, however, extends well beyond a school requirement. As a member of the Sodality, Jacob regularly goes out into the community to meet various needs, whether it’s collecting and delivering coats for the Harry Tompson Center, packing food at the Second Harvest Food Bank, making lunches for the homeless at the St. Jude Community Center, or building homes with Lowernine.org. On campus, Jacob is also active — in Jesuit’s Pro-Life Club and in Campus Ministry, and he serves as both a Eucharistic minister and an altar server. In all he does, Jacob embodies Jesuit’s motto of being a Man for Others. 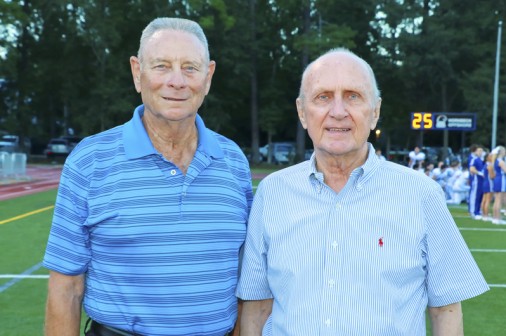 Jim Moore ’56 (left) and Ronnie Gravois ’56 (right) will receive special recognition for their work in establishing and maintaining a website which chronicles the long-standing JHS vs. HC rivalry series.

How many prep rivalries have a website dedicated to it? At least one does – Jesuit vs. Holy Cross. In March of 2003, three Jesuit alumni—Ronnie Gravois, Jim Moore, and the late Dick Daigre, all of the Class of 1956—launched the www.bluejaystigers.com website. As stated on the website, their goal was and remains “to honor the memory of all of the people who have participated or currently participate in this rich tradition, whether as players, teachers, coaches, officials, support staff, bandsmen, spectators, family members, and any other interested parties.” Entries on all but five games from 1922 to the present include press articles, lineups, and season results. The site is the main tool of research for all those interested in this Great American Rivalry.

The recognition ceremony will take place at the end of the 1st quarter and will include Holy Cross archivist Tony Stoltz ’65. 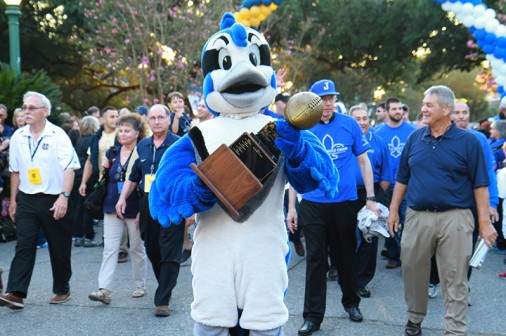 Jayson displays the Golden Football trophy, which Jesuit hopes to reclaim this year.