City Park Brunch Thanks 1847 Society Donors For Their Generosity 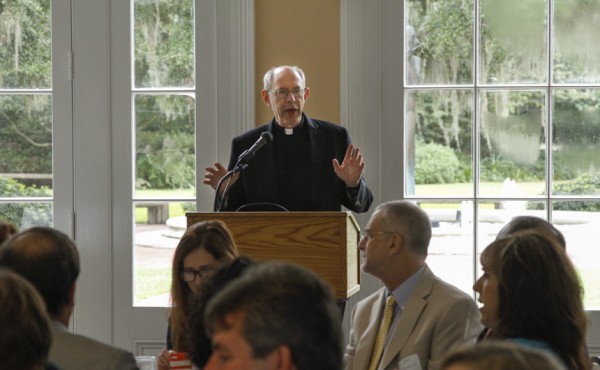 Fr. Anthony McGinn, S.J., thanks donors for their support in keeping Jesuit an affordable school of excellence.

Nearly 300 supporters of the school, one of the largest groups in recent years, enjoyed Jesuit’s 1847 Society donor reception at The Pavilion of Two Sisters in City Park. The event took place on Sunday, August 28, from 10 a.m. to noon.

Jesuit hosts two donor receptions each August to thank those who made significant gifts to the school during the previous fiscal year. The 1847 Society is a giving level whose name is derived from the year the school was founded on Baronne Street. It includes alumni, parents, parents of alumni, and friends who donated between $600 and $2,999 to help keep Jesuit an accessible and affordable school of excellence. Benefactors who donated $3,000 or more were invited to the Ignatian Circle donor reception, which took place a week earlier at the picturesque Audubon Boulevard home of Carol and Al Bienvenu ’88.

Sunday’s 1847 Society event included a delicious buffet-style brunch and a presentation from school president Fr. Anthony McGinn, S.J. Fr. McGinn offered his profound thanks to everyone who makes it possible for Jesuit to fulfill its mission of developing young men of competence, conscience, and compassion to become men of faith and men for others.

Fr. McGinn presented special wooden plaques to a pair of volunteers for their exemplary service during the past year: Lyon “Snapper” Garrison ’81 for serving as chairman of Jesuit’s 2015-16 President’s Advisory Council (PAC) and Laurie Gaudet for her work as co-chair of the 2016 Blue Jay Bazaar.

Fr. McGinn also provided supporters with an update on the school’s presidential transition plan, mentioning that Fr. Christopher Fronk, S.J. will take over as president of the school in January. Fr. McGinn will remain at Carrollton and Banks through March to assist his successor.

The event concluded with the singing of the Jesuit alma mater, accompanied by Dave Schof ’56 on tenor saxophone. Schof is a former member of the Blue Jay band, current member of Jesuit’s alumni band, and a volunteer in the school’s office of institutional advancement.