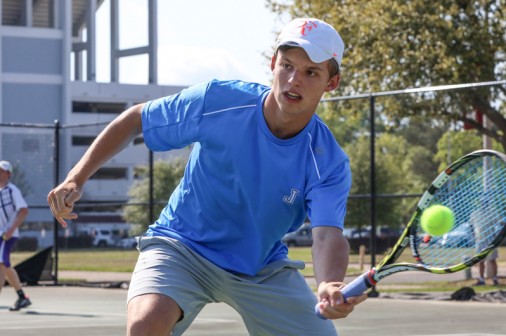 Junior Jack Steib volleys during his first match of the 2016 LHSAA Tennis State Championships. Steib, who recently earned a perfect score on the ACT, was an integral part of the Blue Jays’ tennis state championship win.

Academically speaking, junior John “Jack” R. Steib is a rare bird. A member of the Class of 2017, Steib scored a perfect 36 on the ACT test he took in April.

Nationally, while the actual number of students earning a composite score of 36 varies from year to year, on average, less than one-tenth of one percent of students who take the ACT earns the top score.

Steib, who attended Christian Brothers School and St. Pius X Catholic School before moving to Carrollton and Banks, is the son of Raymond and Tish Steib of Metairie. They are members of St. Pius X Parish. Steib is a member of Jesuit’s varsity tennis team, National Honor Society, Calliope staff, Investment Club, and Peer Support. While he’s keeping his college options open, Steib is interested in studying finance.

The ACT consists of tests in English, mathematics, reading, and science. Each test is scored on a scale of 1-36, and a student’s composite score is the average of the four subset scores. Some students choose to also take the ACT’s optional Writing Test. That test is reported separately and is not included within the ACT composite score.