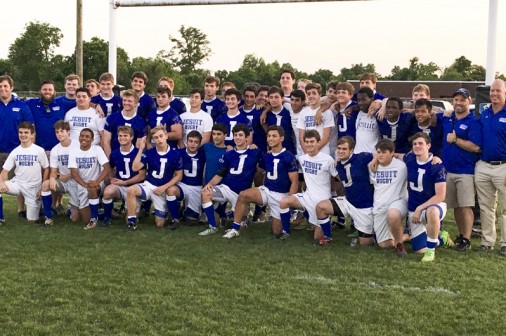 The Blue Jay Rugby team poses for a photo after the state title match on Thursday, May 5.

The Jesuit rugby team enjoyed an incredible run to the state championship match this year. It was a season full of great victories, one that earned them national notoriety. It was also a season enjoyed by their loyal fan base that appreciated their level of skill, intelligent play, and toughness.

When the Jays took to the pitch in the state championship match on Thursday, May 5 against the Bayou Hurricanes, they knew their opponent was formidable. Despite the Jays jumping to an early lead, the Hurricanes stormed their way to a 28-10 win to capture the coveted crown. The Blue Jays’ only two losses this year came at the hands of the Hurricanes.

The Jays received the opening kick and moved the ball effectively. They moved the ball deep into ‘Cane territory and found the try zone with a score by senior Will Waguespack. Senior Scott Derbes’ conversion kick into a stiff wind was no good and the Jays led, 5-0. Soon after, the Blue Jays were back in scoring position after a long run by sophomore Gabe Massey. A penalty by the Hurricanes gave the Jays an opportunity for a 3-point penalty kick, but once again the wind was a factor and the Jays could not build on their lead.

The Hurricanes settled into the match and soon scored a try by Xavier Triplett. The conversion kick was no good and the score was tied at 5-5. The ‘Canes mounted a drive and benefited from a penalty deep in Blue Jay territory. Bayou’s Hunter Breit converted on the penalty kick, bringing the score to 8-5. Later the Hurricanes took advantage of a Blue Jay turnover and scored a try off of a scrum. Brandon Sanders ran past the Jesuit defense with a conversion kick that increased the Hurricanes’ lead to 15-5. 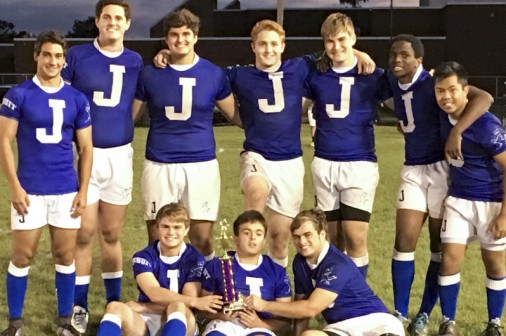 Meanwhile the Hurricanes converted on two penalty kicks by Hunter Breit to extend their lead to 21-5. Later, the Hurricanes’ Josh Sazama broke through the Blue Jay defense to score a try. A conversion kick brought the score to 28-5.

At the end of each rugby match, each team selects a “Man of the Match” on the opposing team. The teams gather in sportsmanship to present the winners a gift. For the Jays, the “Man of the Match” was junior Case Ellis; and for the Hurricanes it was Brandon Sanders.

Catch up on the rugby team’s season highlights, including their national ranking and All-State honors, on the Jesuit Rugby page.