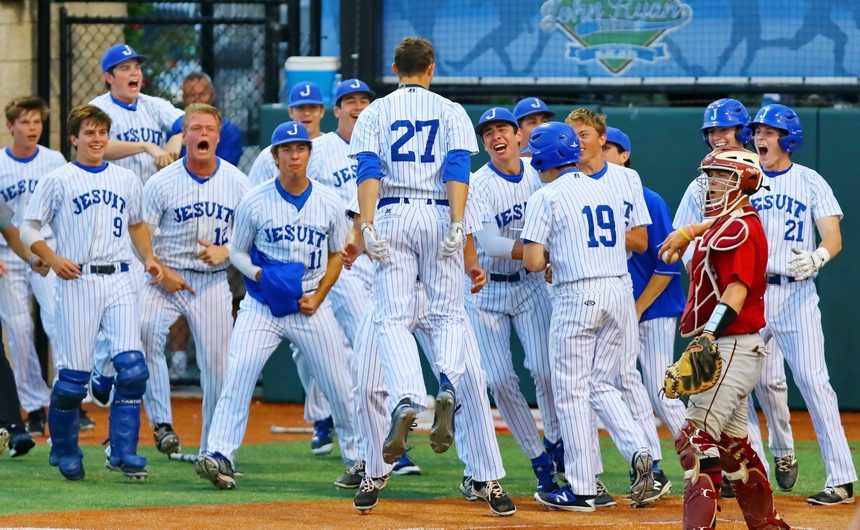 … Stephen Sepcich is the one who’s jumping up… after his inside-the-park home run. View the Photo Gallery. The link is right below this photo.

Update: The series between Jesuit and Destrehan will air live on SportsNOLA.com this weekend as part of the website’s live high school sports coverage presented by First NBC Bank. Read Lenny Vangilder’s Entire Article on SportsNola.com.

View the Live Broadcast of Jesuit – Destrehan Games on SportsNola.com.

Jesuit combined strong pitching with a huge fifth inning rally that included a rare inside-the-Ryan home run by Stephen Sepcich to chase the visiting Ouachita Lions back home in Tuesday night’s opening round of the LHSAA Division 1 Class 5A playoffs. 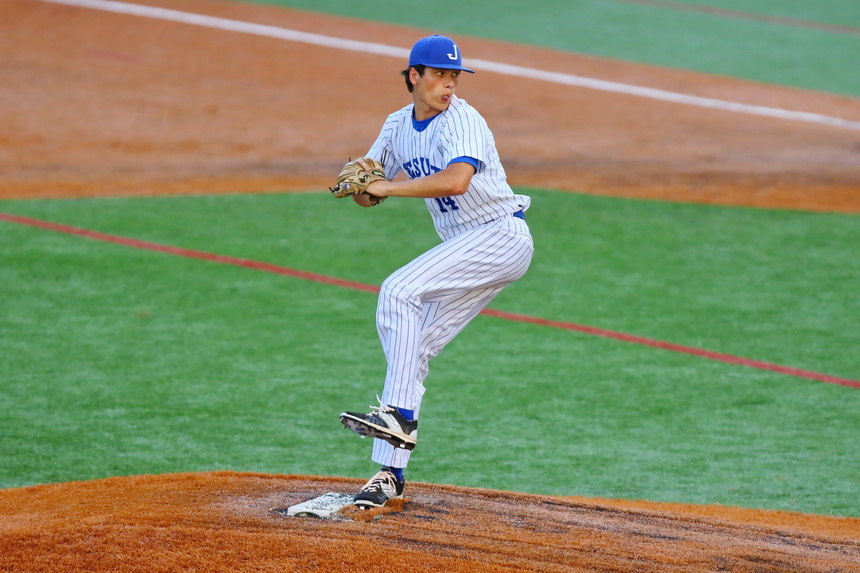 Mason Mayfield earned his sixth win of the season against two losses. He pitched five innings plus one batter, gave up three runs on six hits, and struck out four Lions.

The 9-3 Jesuit win eliminates the Lions and sends the fifth-seeded Blue Jays on to round two, a “best of three” series against regional rival and 12th-seeded Destrehan that will be played at John Ryan Stadium. The Wildcats defeated 21st-seeded Denham Springs, 1-0, and bring a 23-8 record to the Ryan. Jesuit’s record is almost identical at 24-7.

The first game between Jesuit and Destrehan is set for Friday, April 29, with first pitch at 6 p.m.

The second game takes place Saturday, April 30, with first pitch at 11 a.m. If necessary, a third game will start at 4 p.m. Admission for each game is $7 each for adults, students, and children (ages 6-11). Student IDs and season passes are not accepted at the gate for LHSAA playoff games.

After spotting the Lions, 2-0, in the second inning, the Jays pulled to within one when second baseman Brandon Briuglio hit a sacrifice fly that plated shortstop Nick Ray from third base. The 2-1 Lion lead held up until the bottom of the fifth, which began with Ouachita’s pitcher issuing consecutive walks to the two leadoff hitters: Ray and designated hitter Marc Theberge. A sacrifice bunt by Briuglio advanced the runners and Ray scored from third on a wild pitch to tie the game, 2-2.

The Lions’ pitcher got Austin North looking for out number two, but the Jays were just getting revved up. Hayden Fuentes singled to left field, which scored Theberge from third base. The Jays took the lead, 3-2, and never looked back. Hunt Conroy was sent in as a pinch runner for Fuentes and promptly stole second base.

Center fielder Stephen Sepcich uncorked a fly ball to center field that seemed to float over the outfielder, who chased the ball to the wall. The wall in dead-center field is 400 feet, making it pretty 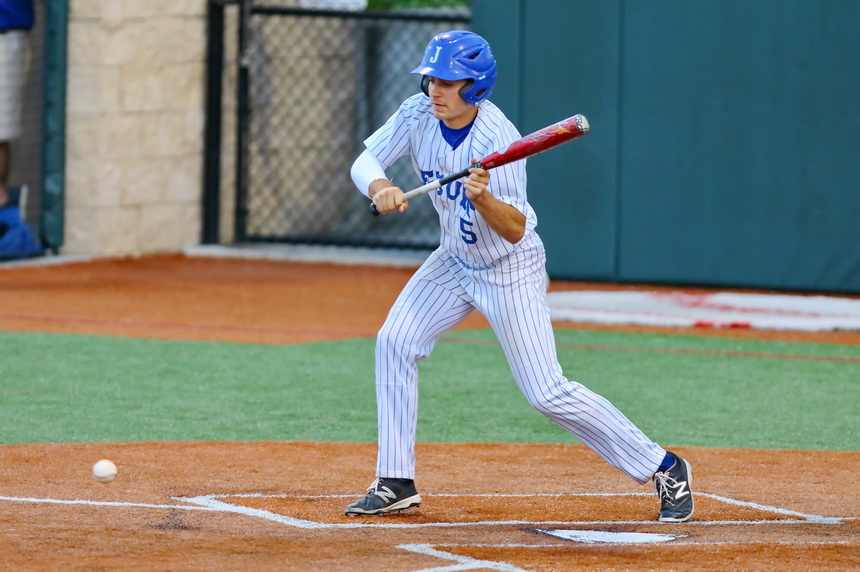 Brandon Briuglio effortlessly lays down a sacrifice bunt that advances two base runners. Briuglio had a single and a sacrifice fly that scored the Jays’ first run.

hard to slug a home run “over the fence.” Sepcich has speed and was halfway to third base when the center fielder reached the ball. Coach Joey Latino waved Sepcich in and the junior outfielder turned on the burners for warp speed. Sepcich was halfway home when the shortstop caught the relay. And Sepcich started his belly slide into home plate as the ball was halfway between third base and the catcher. As Sepcich skidded across the plate, the ball was right above his head and about to bury itself harmlessly in the catcher’s mitt.

He was safe and everybody knew it.

Let’s just say the Jesuit fans roared their approval. The bleachers shook and the grandstand thundered. The Jays spilled out of the dugout, jumping like wild jackrabbits. Was it excessive celebration, a party-pooper term if there ever was one? Well, yes, but you have to keep in mind the mitigating circumstances.

An inside-the-park home run is a rare feat at John Ryan Stadium, which opened in March 2012. It’s only been done one other time, in the 2014 post-season playoffs, when Jesuit beat Alexandria in the “best of three” series. The Jays took the first game, 4-3, then came back the next day and shut out Alexandria in game two, 8-0. In that second game, senior Blake Baker hit a shot to center field that carried far enough for a round trip home. Baker’s “inside” home run also scored Brandon Sequeira, who was on second base with a double. It should be noted that in 2014, Alexandria’s center fielder made a terrible relay throw which helped Baker tremendously.

Earlier this season, Sepcich homered for the very first time over the Ryan’s left field wall (320 feet). The Jays this season have pelted a total of nine home runs compared to just four in 2015. However, not all of the home runs were hit at the Ryan. In fact, most of them were hit at other stadiums and fields. As for who has homered for Jesuit this season, four Blue Jays may take a bow: Nick Ray has four; Brandon Briuglio has two, as does Stephen Sepcich; and Hayden Fuentes has one. 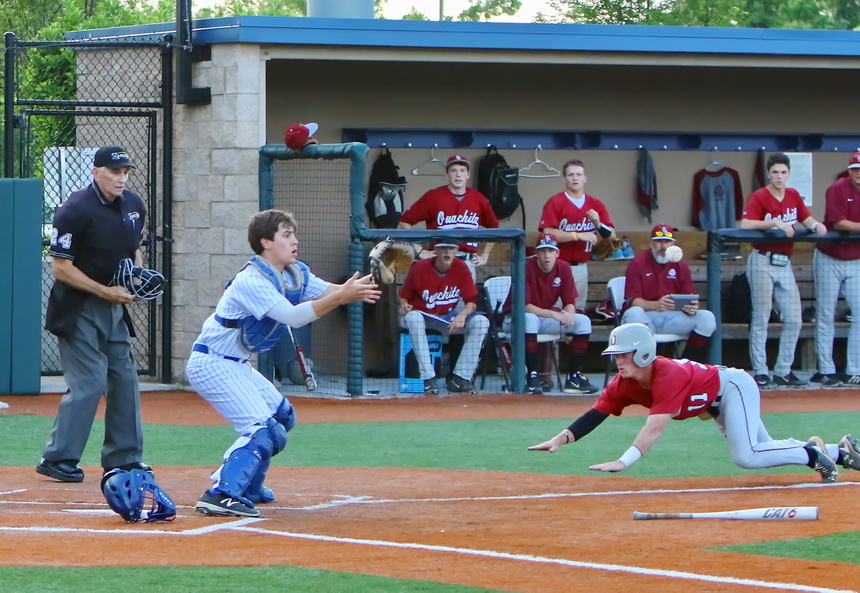 Jesuit catcher Josh Schmidt has the ball in sight and will make the tag on this Lion trying to slide safely home.

Now, back to the Jesuit-Ouachita game. After Conroy and Sepcich scored to extend the Jays’ lead to 5-2, Connor Maginnis hits his second single of the game. Chance Melancon’s pinch-hit single single advanced Maginnis to third base. Melancon easily stole second base. Another pinch hitter, Alex Watermeier, stepped up and singled, scoring Maginnis and Melancon for a 7-2 Jesuit lead.

The Lions still had some fight in them in the sixth inning and scored one run, their third and last, before Todd Crabtree pitched his way out of a bases-loaded jam. Crabtree relieved the Jays’ starting pitcher, Mason Mayfield, who pitched five innings plus one batter to earn his sixth win against two losses this season. Mayfield allowed all three of the Lions’ runs on six hits. He did not walk any batter and he struck out four Lions. Crabtree mopped up the two final innings, and got off to a shaky start – walking the first two Lions – before settling down. He allowed one hit and struck out five Lions.

Coach Latino said the pitching change was a good move. “Not that Mason did anything wrong,” he explained. “At that point, we’re thinking about the weekend, we had a six-run lead, and we have a capable young pitcher in Todd Crabtree, so we brought him in to close it out.”

In the bottom of the sixth, the Jays added a pair of runs to reach the final score of 9-3. Theberge and Briuglio were given free passes and they advanced a base on a wild throw. A balk by Ouachita’s reliever resulted in Theberge coming home and Briuglio advancing to third. Another wild pitch brought in Briuglio for Jesuit’s final run. 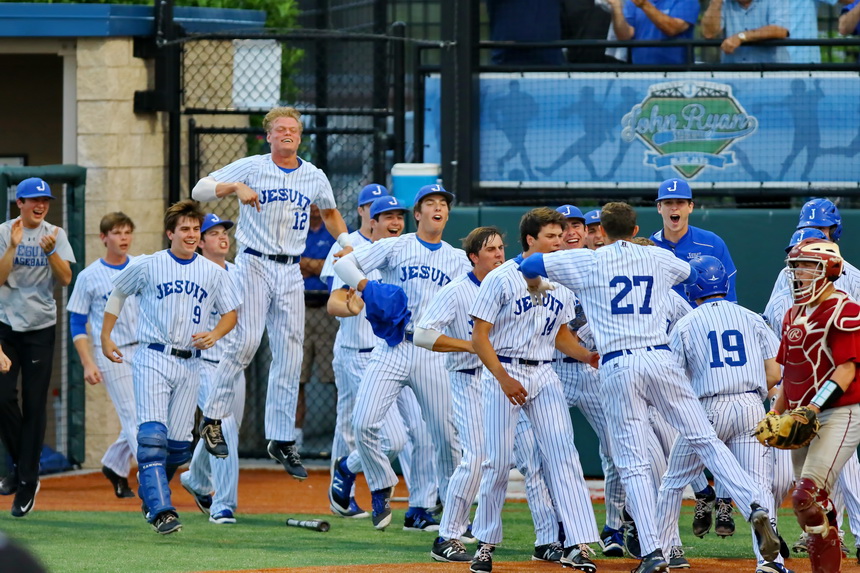 As Stephen Sepcich gets to his feet, the Jays come rushing out of the dugout to celebrate his home run.

“What I’m most proud of is that we didn’t panic,” said Coach Latino. “A lot of teams will do that in that situation if they’re down two runs early at home, it’s a playoff, it’s a do-or-die playoff, at that. The guys kept their composure. They kept having good at-bats against that kid, who did a really good job for Ouachita, the pitcher. He’s good, he’s very good. Even our outs started to get better. We started to hit a few foul balls hard, we started to put the ball in play more frequently and when you do that, you’re eventually going to create opportunities like we got in the fifth inning.”

When it comes to playing the Wildcats of Destrehan, the Jays are successful about half the time. Jesuit leads the series, 20-9, and is also ahead, 4-1, in winning post-season contests, one of which was the 2005 state championship game at Zephyr Stadium. The Jays defeated the Wildcats, 8-2, for the state title. The two teams did not meet in the 2016 regular season. The last time the teams played during their regular season was March 15, 2015, in the annual tournament known as the “Jay Patterson Shootout.” Jesuit won that game, 10-0.