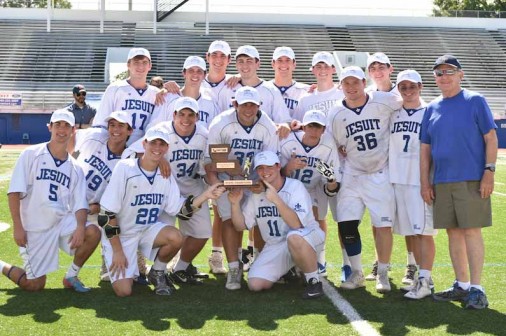 Jesuit solidified its position as the state’s premier lacrosse program by whipping cross-town rival Brother Martin, 15-6, in the 2016 Louisiana High School Lacrosse League championship game. The season finale was played under sunny skies and in front of a large and enthusiastic crowd at Joe Yenni Field in Metairie on Sunday, April 24.

Semifinal games were played a day earlier. Brother Martin edged Loyola College Prep (Shreveport), 7-6, in a game that was decided in the final seconds. The Blue Jays jumped all over St. Paul’s in the other semifinal, beating the Wolves, 19-6.

“When your team goes undefeated in district play and loses just a single in-state game all year, you worry about overconfidence, but our group gave it everything it had on both days,” said head coach Steve Krobert ’05. “I’m so proud of these guys, especially our seniors, who made sure our team was ready to roll when it counted most.” Krobert is assisted by coaches Nick Helinski, Saban Sellers, and Andrew Scott ’13, who, as a player, helped the Jays win their first two titles.

With junior Bennett Faust leading the way, the Jays controlled 11 of 24 face-offs.

Jesuit jumped out to an early lead, but the Crusaders battled tough and kept it close. The Jays’ lead at the half was just 7 to 5. The Crusaders are coached by Greg Anderson, who spent last year as the head coach of Jesuit’s junior varsity squad. “Greg is an outstanding motivator and tactician and I knew he would have his kids ready to play. Hats off to Brother Martin for giving it everything they had,” Krobert said.

Senior goalie Rob Hinyub saved six shots between the pipes against the Crusaders. 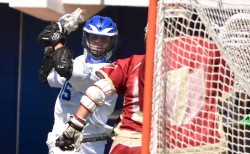 Senior attacker Max Murret, who was voted the championship tournament’s offensive MVP, shoots and scores for the Blue Jays. Murret finished the game with two goals and three assists.

The afternoon ended with LHSLL Commissioner Jay Martinez thanking his host committee, players, parents, and students from all four schools for their support of the weekend and for the growing sport of lacrosse.

Jesuit offers a special thanks to parents Bryant Faust (photographs) and Charles Hamilton (statistics) for the outstanding support they provided our communications team all year long.