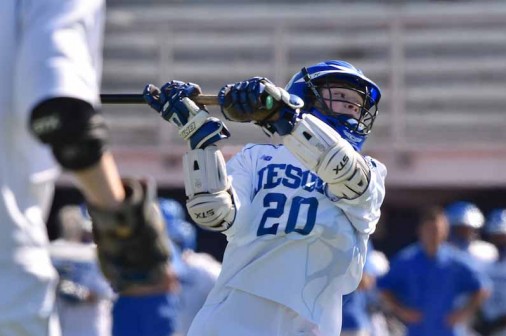 The 2016 senior-packed Jesuit lacrosse team has a chance to do something very special today. After whipping the Wolves of St. Paul’s in Saturday’s semifinal game, 19-6, the Blue Jays can win the school’s 5th consecutive lacrosse state championship.

Their opponent in the Louisiana High School Lacrosse League (LHSLL) title game is cross-town rival Brother Martin. The Crusaders edged Loyola College Prep Shreveport, 6-5, in a nail-biter that was decided in the final seconds.

Within minutes of player introductions and the playing of the National Anthem, the Jays jumped out to a 6-0 lead. Following the opening barrage, the outcome was never in question.

The Blue Jays scored on four of five man-advantage opportunities.

“I love this team, but more importantly, they love each other and it shows in their play on the field,” said head coach Steve Krobert ’05. “I’m so proud of our guys and the teamwork they’ve demonstrated throughout the season.”