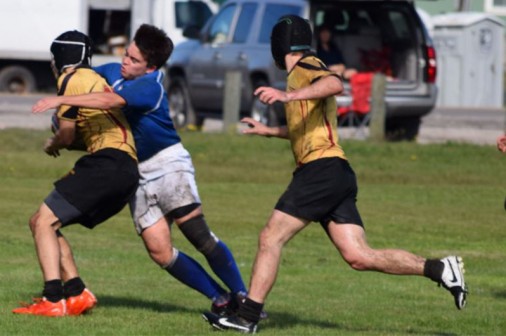 Senior Alex Esparza takes down a Crusader at the Jan. 16 scrimmage against Brother Martin.

The Blue Jay Rugby team has worked hard during their pre-season and is looking forward to the start this years’ regular season on Saturday, Jan. 30 against West Jefferson at Gretna Park. The match will start at 1 p.m.

After a successful pre-season in which the team defeated the Uptown Barbarians and the Houma Hurricanes, the Jesuit ruggers blanked Brother Martin, 30-0, on Jan. 16. The Jays jumped out early and refused to let the Crusaders make it a match. The match was played on a muddy and sloppy pitch. By contrast, Jesuit’s play was disciplined, efficient, and tough.

Coaches Jim Hotard and Adam Massey welcomed two new assistant coaches this year: Jesuit alumni Wes Eustis ’99 and James “Jimmy” Rehkopf ’04. The Jays were also assisted this pre-season by professional rugby coach Gareth Nicholas. Nicholas was a member of the Welsh National Team staff and the former head coach of Bridgend College’s Rugby Academy in Wales. Nicholas worked closely with the Blue Jays at a Rugby Skills Camp on Jan. 9 and will continue to assist the team through March. The skills camp helped players learn and practice new skills, as well as share a bit of Nicholas’s Welsh humor, wit, and wisdom.