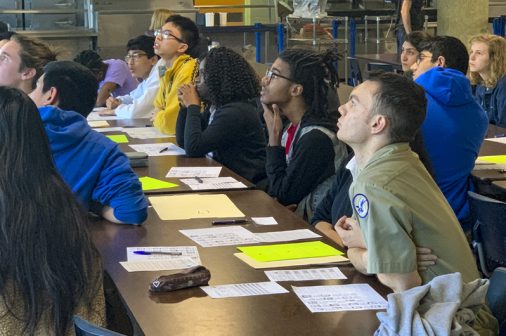 Junior Blake Johnson sits among students from competing schools as players watch the TV screen, which displays questions about Presidents of the United States of America. The Academic Games team, led by Mr. Jordan Holmer ’12, competed in the first round of the Presidents tournament after school in the Jesuit cafeteria. Presidents is a questions and response game in which players develop an understanding of the personalities, historical contexts, political decisions, and other events of our nation’s leaders. Students sit in groups of three or four for purposes of checking each other’s answers and keeping score. Many such groups may be playing simultaneously in the same room. Players are given a range of Presidents that they may consider for their answer. Keep it up, Gamers!