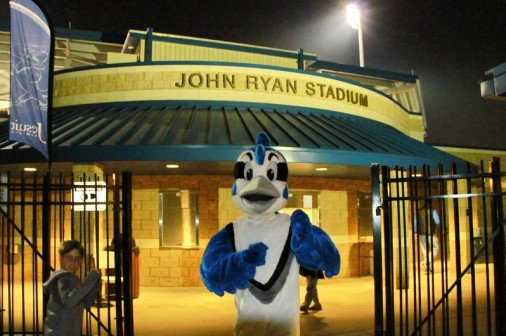 Ubiquitous as he ever was, Jayson stands at the main gate that serves as an entrance and exit at John Ryan Stadium. The Jesuit mascot had just emerged from the grandstand area where he mingled with Blue Jay fans and led the cheering for the Jesuit baseball team. Turns out that Jayson was searching for something cold to quench his parched throat, er, beak. and he found it at the concession stand. While he yearns for sunflower seeds, Jayson knows those are not allowed in the stadium. Besides, he gave up the delicacy for Lent.