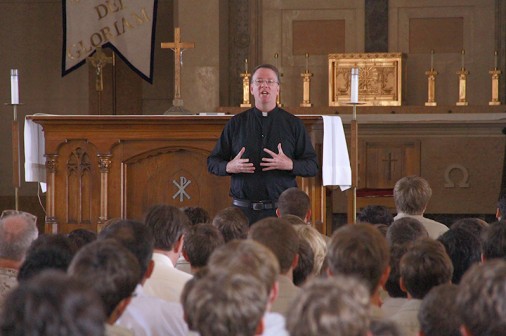 Rev. Tony Corcoran, S.J. speaks to Blue Jays gathered in the Chapel of the North American Martyrs during lunch. Hosted by the Sodality, Fr. Corcoran’s presentation on his missionary work in Russia following the collapse of the Soviet regime attracted a large number of students, faculty, and staff to the large chapel. Fr. Corcoran shared personal stories of his ministry and spoke about the persecution many Catholics in eastern Europe face on a daily basis. A native of Texas, Fr. Corcoran taught here at Jesuit in the early 1990s. He has been working in Russia for more than 17 years and is currently the superior of Jesuits serving in Russia.