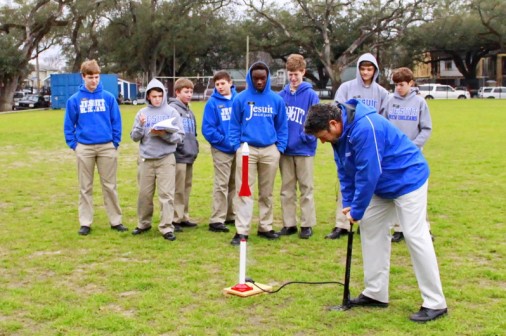 Mr. Nick Nolfe held his physical science class for freshmen and pre-freshmen on Will Clark Field because an inside classroom is a terrible place to launch a pneumatic rocket. From left, Roman Bankson, Nicholas Lacour, Beau Gibbons, Cameron Mazoue, D’Ante Conic, Will Cronvich, Nick Tanet, and Harrison LeBlanc watch as Mr. Nolfe pumps the lightweight rocket 12-15 times. With a sudden whoosh, the rocket shoots off its launching pad at a speed estimated to be more than 135 mph. As the rocket climbs skyward, Mr. Nolfe’s young charges take turns using stopwatches that will help determine the distance from the ground to the rocket’s apex, its highest point. The assignment requires knowledge of a special formula and understanding acceleration of gravity and the effects of air resistance. (The photo was taken with a Canon 7D using a Canon EFS 18-135mm lens at an exposure of 1/4000 sec at f/5:ISO2500).