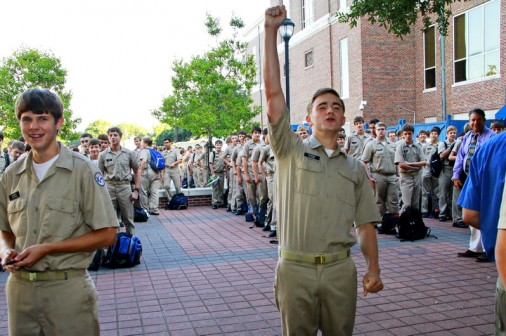 Moments before the final bell signaling the start of Morning Assembly on Friday, senior Francis Plough raises his arm with his fist clenched — as if to punch out the stifling heat and humidity that envelopes the Traditions Courtyard — and begins a spontaneous and enthusiastic solo cheer in salute to the Class of 2015. Plough’s performance infuses a shot of energy into 1,422 Blue Jays, especially the 275 seniors, many of whom momentarily stop yawning to return the cheers, including an amused classmate, Robert Zazulak (left). Plough is captain of the Jesuit swimming team and actively involved in student campus ministry and the sodality, among other co-curriculars, with the exception being the cheerleaders. He would just as soon stand in the back of his homeroom at assemblies and “Plough” ’em over with cheers.