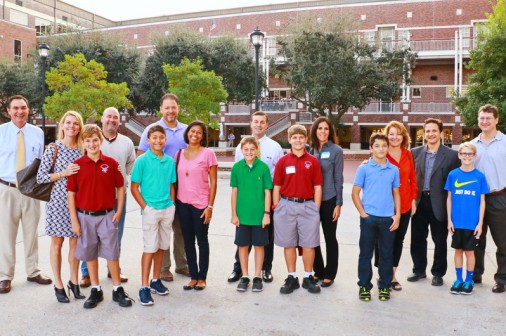 Six young prospective Blue Jays and their parents arrived at Jesuit early Friday to experience a Morning Tour, conducted by admissions director Bret Hanemann ’85 (far left). The group had the opportunity to watch an Assembly, a longtime tradition at Jesuit which brings together the entire student body of almost 1,400 Blue Jays. Assemblies take place on Mondays and Fridays in the Traditions Courtyard and students listen to important announcements about upcoming co-curricular meetings, intramural activities, sports scores and academic accomplishments, and special events, including Jesuit’s Open House on Wednesday, Nov. 4 (tour times begin at 4:30, 5:30, and 6:30 p.m.). Jesuit’s Assemblies often serve as the stage for distinguished alumni to address current students. The most recent Blue Jay alumnus to speak was Del Hall of the Class of 1953, who talked on Monday, Oct. 26, about his career as a photojournalist with CBS News. During the Morning Tours, which typically last about two hours, Mr. Hanemann answers questions about the admissions process while showing the young men and their parents virtually every nook and cranny Jesuit occupies at Carrollton and Banks.