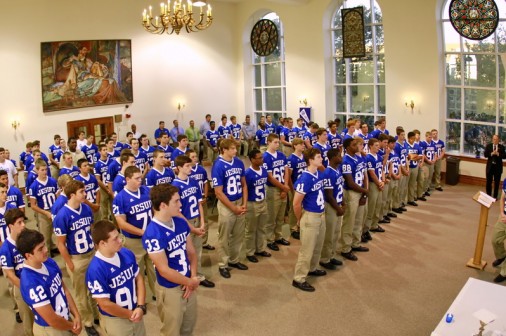 The start of Jesuit football, with all of its weekly hoopla, fun, and excitement, also heralds the quiet celebration of a Mass for the Blue Jay players. Usually this Mass is held in the Holy Name of Jesus Chapel on the second floor of the Banks Street administration building. Believe it or not, all of the roughly 95 members of the team have successfully squeezed into the small Chapel, which is currently undergoing an extensive renovation, although definitely not from being overcrowded. When completed in 2015, the renovation should substantially increase the amount of available elbow room in the Holy Name Chapel. In the meantime, when the football game falls on a Friday (such as it does with Ponchatoula on Friday, and for most of the upcoming season), the players gather for Mass at 7:10 in the morning in the relatively spacious St. Ignatius Hall, an oasis of sorts with its beautiful arched windows overlooking the live oaks on Banks Street and the hustle and bustle going on in the school yard below. St. Ignatius Hall is an appropriate setting for the Mass since it once served as the Chapel for the numerous Jesuits in residence, and offers an intimate and cozy atmosphere for prayer and reflection, even sans pews. Having the Mass for athletes in St. Ignatius Hall also does not interfere with the daily Mass for students that is celebrated each morning at 7:15 on the other side of the yard in the Chapel of the North American Martyrs — a distance equivalent to maybe one nice run or a long pass from our spiritually fortified Blue Jays.