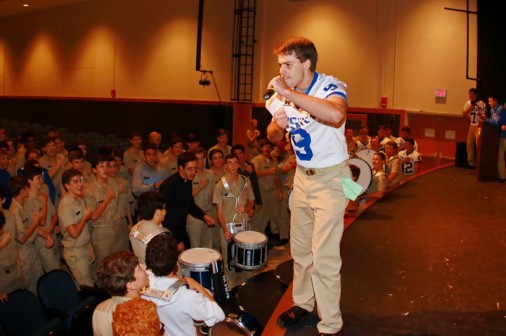 An energetic and feisty Scott Jenkins, a senior wide receiver (#9) on Jesuit’s football team, takes center stage to pump up fellow Blue Jays at Friday’s spirited lunchtime pep rally. Pep rallies are typically held in the Traditions Courtyard, but because of a steady rain that fell during school hours, today’s event began in the Student Commons and wound its way through the cafeteria before landing in the auditorium. Accompanied by the Blue Jay Marching Band’s drum corps, Jenkins and other seniors in the Spirit Club led cheers and exhorted students to be among the fans who will be supporting the Blue & White in their game tonight against St. Paul’s at Tad Gormley Stadium.