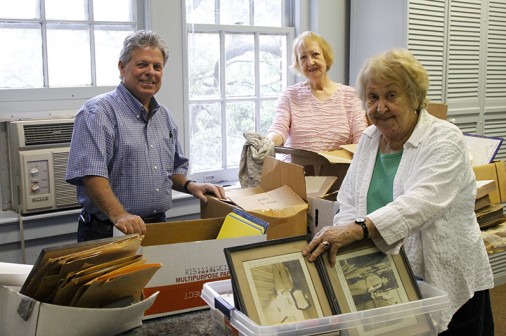 Lynn (center) and Winifred “Winnie” Worley (right) assist alumni director Mat Grau ’68 with items from the Jesuit archives. Spanning more than 165 years, the school’s vast archives boast everything from historic photos to newspaper clippings to original report cards to athletic and academic memorabilia. Lynn and Winnie have donated several items to the archives, including a nearly century-old class photo taken at the original campus on Baronne and Commons. Lynn and Winnie are the daughters of the late Andrew Worley (1919) and the sisters of Joseph Worley ’55, namesake of The Joseph Michael Worley Memorial Award — given to the senior who, by his unselfishness, sportsmanship, and spirit during his career at Jesuit, enhanced the athletic program either as a player, manager, trainer, or student.