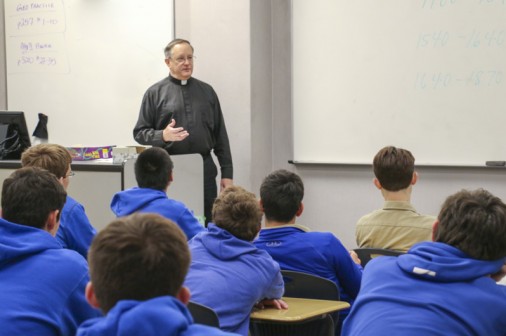 An immersion trip to eastern Asia may not be feasible to the average Jesuit student, but roughly 70 members of the Sodality from all grade levels were treated to a fascinating piece of Japanese culture. Fr. Bill Farge, S.J., who spent nearly 20 years of his Jesuit life in Japan, presented to the Sodality during lunch about “the Catholic samurai,” the Japanese warrior whose way of life synthesized well with the Catholic faith in the time prior to (and even during) the Christian persecution of the 17th, 18th, and 19th centuries. Fr. Farge now lives in the Jesuit residence on campus and gives spiritual direction to diocesan seminarians at St. Joseph’s Abbey in Covington.