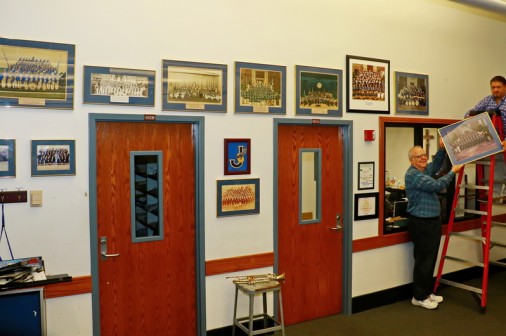 David Schof, Jr. ’56 and David White ’83 (on the ladder) prepare to hang the last, at least for now, of eight iconic photos of Blue Jay Bands on the wall that is part of  the current band room, located on the third floor of the Palmyra Street side of the 1953 wing. White discovered the original photos of Blue Jay Bands from various years, including the very first Jesuit Band from 1930-31 (it’s on the far left). Other photos of the Jesuit bands included the years 1933-34, 1934-35, 1938, 1945, and 1980-81. White took it upon himself to have each original photo professionally cleaned and reframed. Schof and White were in their respective Blue Jay Bands as students and are still making music with other Jesuit band alumni. Schof, who volunteers in the advancement office once week, plays the alto sax; White plays clarinet. The alumni band, with about 28 members, give or take a few from year to year, usually convenes to play for the Jesuit-Holy Cross football game. White is talking with alumni director Mat Grau ’68 about a reunion of all Blue Jay Band members that would happen sometime this summer. Schof just happened to be at Jesuit on Monday in his volunteer role and agreed to help White who wanted to display the 1980-81 Blue Jay Band photo. If any alumni have their own treasured photos of the Blue Jay Band they would like to donate for display in the band room, contact David White by email: dpwhite504@cox.net. A root-a-toot-toot and a big Thanks to this pair of musical alums!