Walks on the Wild Side

Jays Dispense Crusaders, 3-2; Up Next: Holy Cross on Saturday 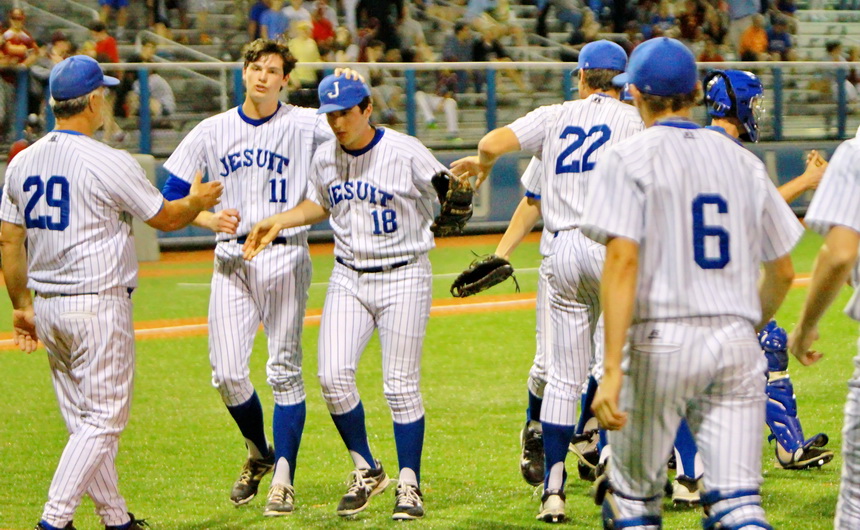 Coach Joey Latino comes out on the field to join Jack Burke (11) in congratulating Logan Hornung (18) who pitched the last out against Brother Martin with the bases loaded.

Nursing a 3-0 lead over the Crusaders going into the final inning, the Blue Jays fought off the demons Wednesday night and escaped John Ryan Stadium with a 3-2 win.

It’s the second district win for Jesuit and just what the doctor ordered after last Friday’s 5-4 loss to Rummel in 10 innings.

The Jays play Holy Cross on Saturday, April 4 at the Tigers’ field off Paris Avenue. First pitch is 1 p.m.

Jack Burk started on the mound for the Jays and almost went the distance in picking up the win. He allowed one run on three hits and struck out 11 batters.

“I wasn’t nervous, I was just trying to throw strikes,” said Burk. “Once I came out we have an unbelievable pen. I had the confidence in Mason and Logan to get the job done.” 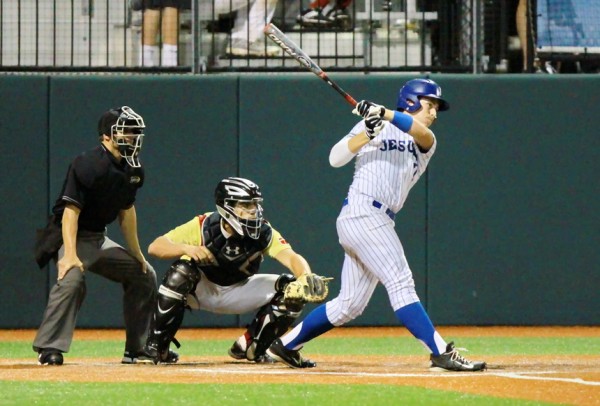 Coach Joey Latino said another one run game shows the competitiveness of the Catholic League.

“It shows just how tough our opponents can be,” he said. “We want to get back to where we are competitive and put ourselves in situations where we come through and get big hits. Scott Crabtree did that tonight. And I can’t say enough about Jack Burk’s performance. That’s a top pitcher giving us his top performance in an important game. That says a lot about him.”

Crabtree hit an RBI single in the third inning to give the Jays a 1-0 lead. Two innings later, he hit an RBI double. The Jays had a 3-0 lead heading into the seventh inning, but the Crusaders hung tough. Burk walked four Crusaders in the inning and with two out and the bases loaded, Coach Latino looked to his bullpen. When reliever Mason Mayfield walked in the second run for the Crusaders, Coach Latino once again signaled the bullpen.

To the mound came Logan Hornung who worked up a 3-2 count before hurling a fast ball that the Crusader batter swung and missed. Game over.

“We had a chance to distance ourselves in the fifth,” said Coach Latino. “We got up 3-0 with bases loaded and couldn’t push another run across. Now you see how important the fourth run, that fifth run could have been. I had every confidence in the bullpen. Mason came in and battled. Unfortunately he couldn’t get the big out. But Logan Hornung one of our seniors, a leader pitcher, he came in and got the last out.”

Did Hornung feel some pressure?

“I’ve been put in the situation so many times,” he said nonchalantly. “I just came in and left it all out on the table.”