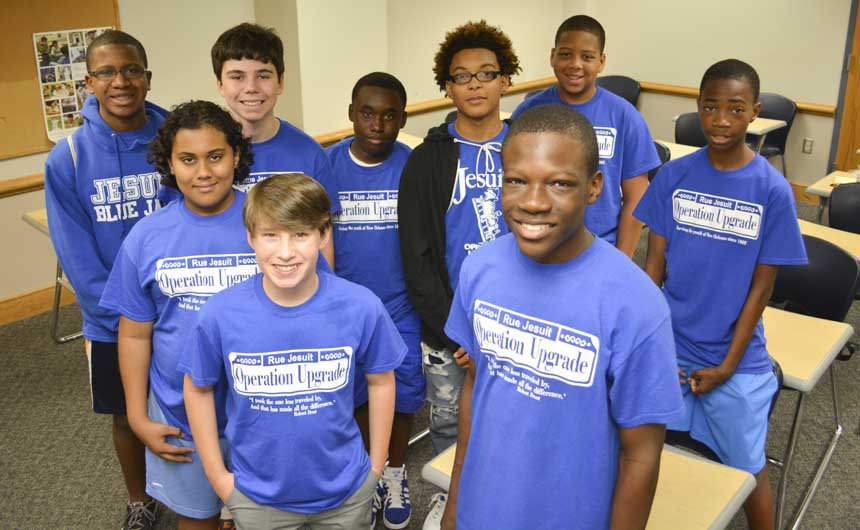 U. S. Attorney Kenneth Polite didn’t attend Jesuit High School. But he does have fond memories of the five weeks of summer that he spent at Carrollton and Banks.

“It was a wonderful experience for me,” recalls Polite, one of some 3,000 graduates of Operation Upgrade. “I learned so much that summer. Jesuit will always have a special place in my heart.”

The roster of Operation Upgrade’s graduates is impressive and includes valedictorians from Jesuit, St. Augustine, and Brother Martin. And then there is Polite, who did not attend Jesuit, but instead matriculated to De La Salle High School, where he was the valedictorian of his graduating class.

“De La Salle offered me a full scholarship before anything was yet on the table from Jesuit,” explains Polite. “My mom, being a single mother with very limited resources, felt she needed to pounce on the bird in the hand.”

Of course, many Upgraders do eventually wear the Jesuit khaki uniform. More than 50 Upgraders have graduated from Jesuit since 2011, including a record 15 from the Class of 2014. Indeed, that is one of the program’s three primary goals. 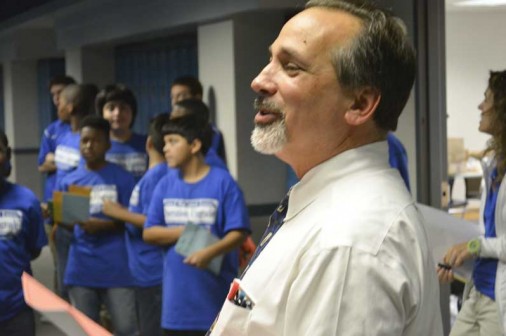 “The first purpose is to serve economically disadvantaged, at-risk male youths,” explains James Michalik, a theology teacher at Jesuit who serves as director of Operation Upgrade. “The second is to afford our Jesuit students the opportunity to learn and share the blessing of their education with others through service. Finally, the program looks to identify students who have the potential to thrive at Jesuit High School.”

Michalik says Operation Upgrade allows the staff to build relationships with students, who with their parents, might never consider the possibility of becoming Blue Jays.

For all its successes, many in the Jesuit community aren’t even aware of Operation Upgrade’s existence. “It’s one of the better kept secrets at school,” says Michalik, who has overseen the program for the past 19 years. “That’s not necessarily intentional. It just has a low profile.”

The school’s publications archives turn up a single mention about Operation Upgrade, a brief article marking the program’s 10th anniversary found in a 1979 issue of JayNotes.

With its 47th session having just finished, the program retains many of the cornerstones of its original foundation. Upgrade still keeps to an enrollment of approximately 60 students spread among six classrooms, although the program now includes rising sixth-graders as well as seventh- and eighth-graders. 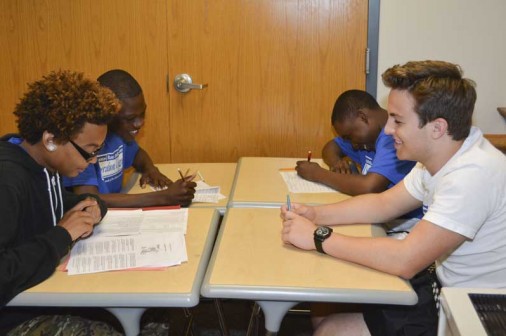 Students work in pods led by Jesuit seniors. The typical student/teacher ratio is 3:1.

Each of the six classrooms is overseen by a teacher, who is assisted by four student teaching aides. The aides are predominantly rising seniors at Jesuit who are completing their service projects.

“The student/teacher ratio is basically 3:1,” explains Michalik. “The students who come through the program, therefore, receive plenty of individual attention, which is critical to their success.”

Also unchanged is the program’s commitment to affordability. Fees for the program are nominal, and are waived altogether in many cases. Operation Upgrade is financed primarily by Jesuit High School and the Central and Southern Province of the Society of Jesus. Additionally, the Brown Foundation, one of the area’s leading philanthropic organizations, has provided important grant support.

As it has from the get-go, Upgrade stresses fundamentals. The day begins with a reading period that lasts 50 minutes. Students in each class form a circle and take turns reading aloud from books selected from Upgrade’s library. The reading component made its debut when former longtime Jesuit theology teacher Dr. Thomas Spitzfaden directed the program. Since taking over, Michalik has cobbled together classroom sets of more than 50 titles. 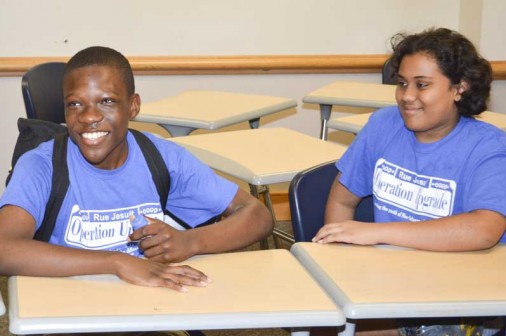 During the in-class reading period, teachers make frequent stops to check for comprehension and to guide discussions. Over the course of the five weeks, with homework reading assignments factored in, each class typically completes three to four books.

Jay Combe ’83, who supervises an eighth-grade classroom, says the time spent reading is his favorite part of the day. “The students selected a great mix of books this year,” he says. “First, we read The Feed, a remarkably prescient piece of young adult literature published back in 2002 that provided endless opportunities for discussion about modern culture, technology, and consumerism. It was a great book for promoting critical thought about the Internet era. Then we went old school with Lord of the Flies and closed out with The Pact.

Combe, who teaches social studies at Jesuit, says The Pact is a nonfiction best seller about a group of at-risk boys from Newark who cross paths and vow to overcome their challenging circumstances.

Over in Jason Giaccone’s classroom, seventh-graders knocked out four books: The Boy in the Striped Pajamas, Deathwatch, The Giver, and Encyclopedia Brown.

“If I had my way, I’d incorporate mandatory daily reading into all schools,” says Giaccone, a 13-year Upgrade veteran who teaches fine arts at Jesuit and is assistant director of the Blue Jay Band. “Of course, the class sizes are critical to the success of that part of the day. Having only 10 students in the room really allows us the freedom to operate much like a college seminar.”

This summer the veteran Giaccone and Combe — a rookie supervisor whose last experience with Upgrade was as a student teacher back in 1982 — were joined by three other Jesuit teachers and one alumnus in guiding Upgrade’s classrooms. Scott Delatte ’06 and Daniel Fitzpatrick ’09 shepherded seventh-grade classrooms, and Sylvia Schild and Brian Credo ’11 oversaw sixth-grade classrooms. Schild, who is head of Jesuit’s library department, is the longest-tenured of the Upgrade faculty with 18 years of service. One of the youngest teachers, Credo graduated as a valedictorian candidate from the University of Notre Dame and is pursuing a Ph.D. in classics.

After the reading period, students break into four “pods” within their classrooms to complete exercises in English, mathematics, and problem solving. Each of those three daily sessions runs for 40 minutes. After that, it’s out to Will Clark Field on Mondays through Wednesdays for some physical activity. This year, students rotated among soccer, Ultimate Frisbee, and whiffle ball. 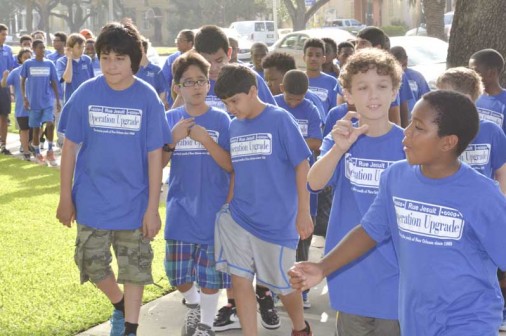 Upgraders head out for a field trip to the Prytania Theatre.

On Thursdays and Fridays, student teachers conduct “electives” in a variety of subjects of their own choosing. This year’s Upgraders were able to select options ranging from drumming to chess, from Ping Pong to creative writing. There were even some off-the-wall topics which ended up being really popular.

Seniors Ethan Michael Gilberti and Darren Ruiz taught a class on Game Character Development. In the first session, Gilberti introduced Upgraders to the basic framework and guidelines used by animation designers when creating video game characters. In the second session, Ruiz talked about the computer engineering and mathematics involved in the process.

“It’s something I’ve always been interested in,” says Gilberti, whose mom, Carolyn, is an artist.

Senior Noah Billeaud, meanwhile, taught a class on Nerf Theory. “A lot of the kids who signed up thought we would be playing Nerf football,” says Billeaud. “Instead, they learned some basic physics.”

“I was really impressed with the effort our seniors put into their electives,” says Michalik, who circulates among the rooms during that time. “Ethan, Darren and Noah really knocked it out of the park.”

As a reward for their hard work, students take a field trip near the end of the five weeks. This year, Upgraders and their chaperones attended a private screening of Jurassic World at the Prytania Theatre. 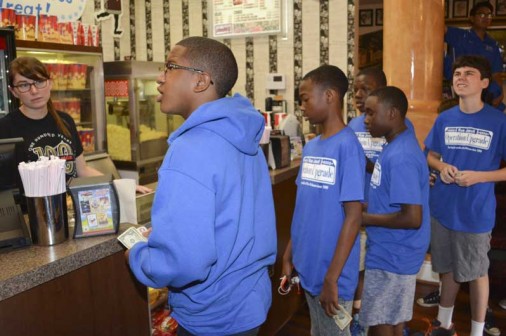 Upgraders seek refreshments before taking in Jurassic World at the Prytania Theatre.

“The kids were raving about that experience,” says Michalik. “I can’t say enough good things about the folks at the Prytania. They understood that our kids had limited resources and really went above and beyond to make this work.”

Upgraders also voluntarily stick around for some after-school activities (like chess and three-on-three basketball tournaments), and complete pre- and post-assessments of skills to measure improvement. Those tests are portions of old Catholic school admission placement tests.

“Typically, we see a significant rise in the test scores,” says Michalik. “The goal is to raise math scores by a full grade level, while improving English and reading levels by a half year. More than half of this year’s students met that goal, which is amazing for a five-week program.”

The culminating event of each Operation Upgrade session is its graduation ceremony. This year’s keynote speaker was none other than Kenneth Polite, the region’s top federal prosecutor.

After an introduction from Michalik in which he was honored as the inaugural member of Operation Upgrade’s Hall of Fame, Polite mesmerized Upgraders and their parents with his personal story and message. 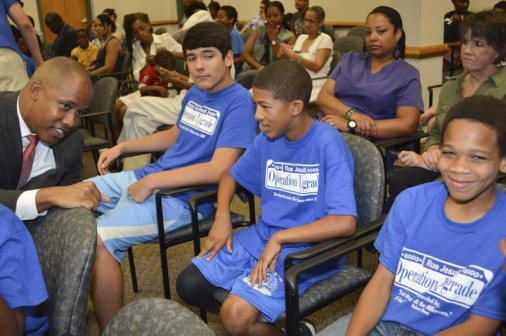 “You can do anything,” Polite told the boys, citing his own experience of growing up in a single-parent household in the lower Ninth Ward. He was the first African-American valedictorian at De La Salle and matriculated to Harvard University and Georgetown Law School. His 2013 appointment by President Obama as U.S. Attorney for the Eastern District of Louisiana was confirmed unanimously by the U.S. Senate.

It wasn’t always smooth sailing, though. Perhaps the lowest point came when Polite’s 23-year-old half-brother became a victim of the streets of New Orleans. It was a defining moment for Polite, who jumped at the chance to take a position where he could make a difference in his home town.

Finally, Polite emphatically told the boys that “only you can bring the peace to our community.”

“You,” he continued, pausing to make eye contact with virtually every young man in the room, “are destined to be the greatest generation our community has ever seen.”

The 61 newest Upgrade alumni received graduation certificates from Michalik, who then presented special awards to several students and mentors. 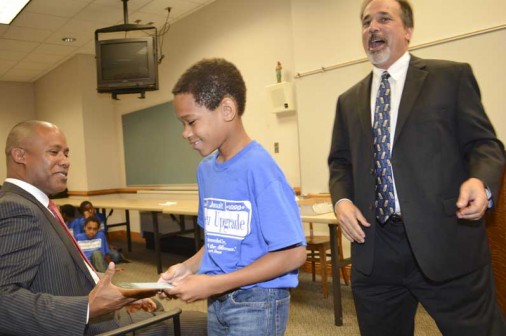 Upgrader of the Year:  This summer, the honor went to Nehemiah Prater of Lake Forest Elementary Charter School. Prater is congratulated by U.S. Attorney Kenneth Polite, himself a graduate of Operation Upgrade.

“Upgrader of the Year,” an honor based on a vote of the staff, went to Nehemiah Prater, a rising seventh grader at Lake Forest Elementary Charter School.

“We were really blessed with some extraordinary young men helping us this year,” says Michalik. “They certainly made my job easier.”