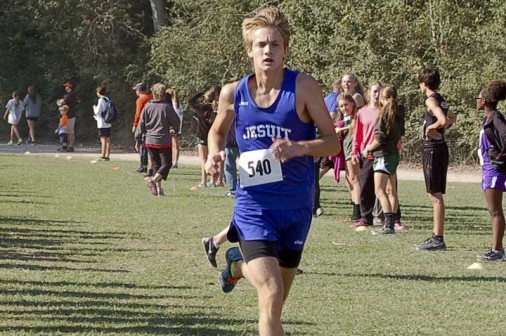 Early on Saturday morning, Jesuit’s top five cross country runners laced up their sneakers. But it wasn’t for a formal race. The quintet–seniors John James and Carlos Zervigon, along with juniors John Kling, Reed Meric, and Eli Sisung–met up at City Park for a training run.

Why, you ask, would Coach Rudy Horvath ’86 send his top guys on a training run on the same morning as the Varsity Sports/Walker Shootout, essentially conceding the race to St. Paul’s before it even began? Well, Horvath had a more pressing priority: giving one last chance for the runners clustered tightly together in the next ten spots to earn a slot on the seven-man roster for the district championship meet on Thursday, October 28.

“The Walker meet allows ten entries per team,” explains Horvath, “I had five guys who had already earned their slots at the district meet. But I had ten other guys who deserved one last opportunity to make the rest of my decisions a little easier.” 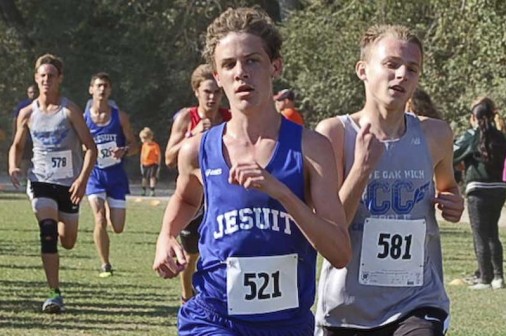 Junior Tanner Tresca and senior John Nimmo did just that, finishing one-two for the Blue Jays on the day and earning the sixth and seventh slots on the district roster in the process. Both runners took advantage of the cool weather and dry course to set personal records (PRs) on the three-mile course. Tresca crossed the tape in 16:08 (31st overall in a 256-man field), while Nimmo came in at 16:22 (42nd).

Also setting PRs on the day were Jesuit’s third, fourth and fifth-place runners. Senior Nick Slay came in at 16:39, junior Luke Malter at 16:45, and sophomore Jordan Tufts at 16:46. One other Blue Jay broke the 17-minute barrier. Senior Johnny LaForge, who has been battling an array of injuries all season, including plantar fasciitis, clocked in at 16:51. 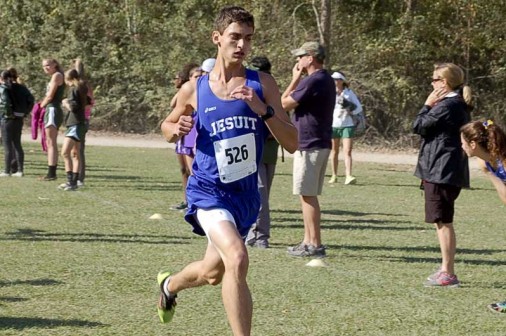 Jesuit ended up in seventh place in the team totals, well behind the state’s top-ranked team, St. Paul’s, which torched a strong field with a 60-point total (in cross country, the place in which a team’s top five runners finish is added together to arrive at a final score).

Just because the district roster is set doesn’t necessarily mean the state roster is. “We could still see some movement by the time state rolls around. At this point, the only guys who have definitively punched their tickets to Natchitoches are Reed Meric, Carlos Zervigon, and Eli Sisung,” says Horvath. “That said, the district roster speaks for itself. ”