Tigers Grab Jays by the Tail

Up Next: Jesuit Travels to the West Bank on Tuesday, April 7, to Play Shaw 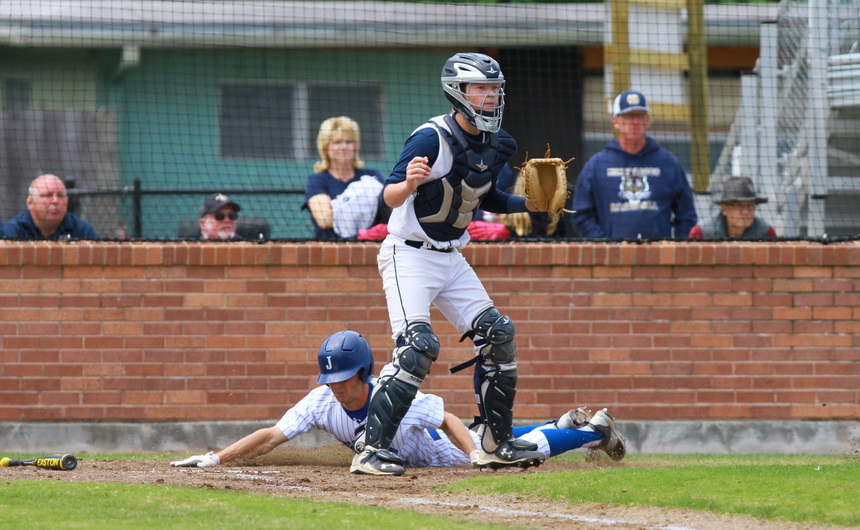 Six Jesuit runs were not enough to beat Holy Cross on Saturday (April 4). Not when the Tigers push eight of their own across the plate.

The Jays dropped a crucial district game at the Tigers’ lair, 8-6, and in the process, put their quest for a district title in serious jeopardy.

Jesuit (17-7 overall; 2-2 in district) will play Archbishop Shaw on Tuesday, April 7, at the Eagles’ baseball field behind the school. First pitch is 4:30 p.m.

Against Holy Cross, the Jays looked strong in the very first inning when they jumped out to a 2-0 lead.

“This was the first time in I don’t know how many games that we actually punched in a couple of runs across the board in the top of the first and I felt good,” said Coach Joey Latino. “Then we promptly give up three in the bottom of the first. The whole complexion of the game changed in 10 minutes.” 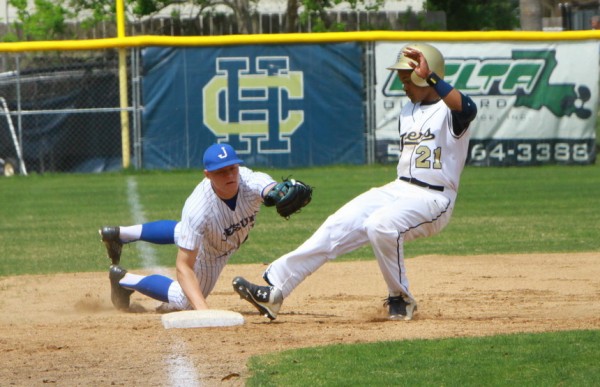 Nick Ray lunges toward a Tiger runner in an unsuccessful attempt to tag him out at 3B.

The Jays chalked up an uncharacteristic three errors, including a key infield mistake in the bottom of the first inning that negated a potential double play.

By the end of the fourth, Jesuit had notched three runs while the Tigers had all eight of their runs. The Jays put together a rally in the fifth and scored three runs to make it an 8-6 ball game, but the final two innings yielded nothing more.

Jesuit’s Sean Bretz started on the mound and took the loss, his first against three wins. Bretz gave up four hits and five runs (two were earned). He struck out four batters and was pulled after the first out in the second inning. Connor Maginnis retired the final two batters in the second inning, but not before beaning two Tigers and giving up two runs on one hit. Logan Hornung was sent to the mound in the third inning and pitched the remainder of the game. He gave up four hits and one unearned run.

“The one thing I am happy about is we kept battling pitch to pitch like we’re expected to do,” said Coach Latino. “I’m disappointed in our pitching overall. We’re just not getting it done. We look like a different team with (senior) Jack Burk on the mound and we have to have that same confidence and play with that same — I hate to use the word swagger, but that’s what it really comes down to — when the other guys are on the hill.”

Coach Latino gives Holy Cross a ton of credit. “They’re a very good baseball team and they’re sitting on top of district for a reason,” he said. “That’s no fluke. We just have to find a way to get better.”

N.O. Advocate: Brenden Taravella records another save as Holy Cross holds off Jesuit