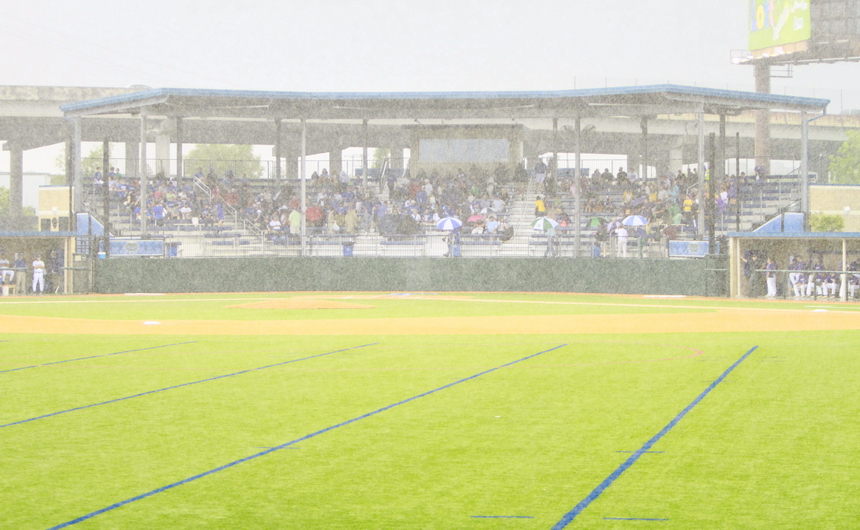 Last season during the quarterfinal playoffs between Jesuit and Alexandria, the rain fell so hard at John Ryan Stadium, the game was called early and completed the following day. The Ryan’s artificial turf drains well but some thunderstorms bring dangerous lightning in which case, the field is quickly cleared.

The Catholic League coaches have rescheduled a slew of games because of rain.

The Jesuit – Holy Cross game is still scheduled to be played Friday, April 17 at John Ryan Stadium at 7 p.m. If that game takes place, it will have been one week since the Blue Jays played ball. Jesuit’s most recent game was a 2-0 win over St. Augustine last Friday (April 10) at John Ryan Stadium.

The Jays’ game against John Ehret will take place as scheduled on Saturday, April 18. First pitch is 6 p.m. This game has been designated as “Senior Day” and a brief pre-game ceremony will take place to recognize the 11 Blue Jay players who will soon be graduating.

The Jesuit – Rummel game, which was canceled Tuesday, is being moved from Kirsch-Rooney Stadium and will be played on Sunday, April 19 at 3 p.m. at John Ryan Stadium. (Note that the game is 3 p.m., not 1 p.m., as stated in an earlier post.)

Keep in mind the new schedule could be disrupted once again by the weather. The forecast calls for rain and thunderstorms in the metro area through Sunday.

Nola.com: Rain shifts District 9-5A baseball action into the weekend