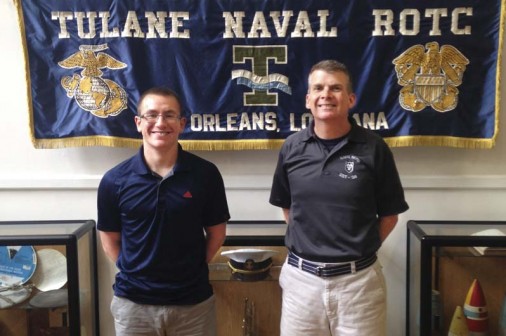 Between the end of final exams and graduation, Matt Subervielle ’15 spent a day shadowing Capt. Patrick Huete ’84, who leads the Naval ROTC program at Tulane University.

Matt Subervielle ’15 thought he wanted to be a Marine Corps officer. Now he knows for sure.

“I really enjoyed spending time with Matt,” said Huete. “He was very engaged, asked insightful questions, and is serious about earning an officer’s commission in the Marine Corps.”

Subervielle earned the rank of Cadet Lieutenant Colonel in Jesuit’s MCJROTC program, and served as Parade Commander during the program’s Change of Command Ceremony on April 29, 2015.

During their day together, Huete introduced Subervielle to his active duty staff at Tulane, who shared their specific Navy and Marine Corps career paths, as well as their experiences in the field.

Subervielle, who plans to attend The Citadel, says the shadowing experience exceeded his expectations.

“The best advice I got was about how to handle certain predicaments that might arise while in the military, and how I can be a more effective military leader.”

The voluntary program, which began in 2005, is coordinated by Jesuit’s guidance department and allows graduating seniors to spend time visiting with, and touring the workplace of, a professional in the career of their interest.

Most of the professionals who choose to participate in the program are Jesuit alumni, living the Jesuit motto of “Men for Others” as they help guide young Blue Jays along the path to their future careers.

Alumni interested in serving as a host can contact Ms. Daigle or alumni director Mat Grau ’68, or by completing this online form.