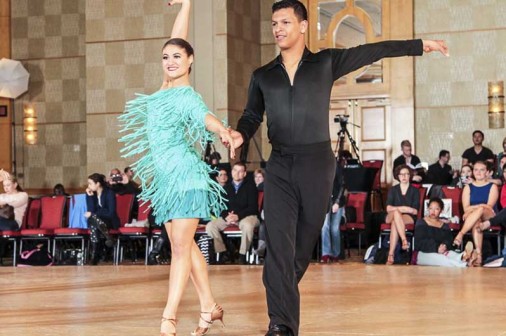 Senior Osman Torres is well known to his classmates—and Catholic League quarterbacks—as an anchor of the Jesuit football team’s defensive line. A defensive end who started every game during the Blue Jays’ state championship run, Torres recorded 97 tackles (38 of those solo) and five sacks during the 2014 campaign.

Not as well known, however, is the fact that Torres is as agile on the dance floor as he is on the football field. Torres, whose parents Orman and Ondina emigrated from Honduras in 2001, first turned to dance in 5th grade as a way of competing with his older sister, Victoria, who had taken up the salsa dancing so popular throughout Latin American culture. “At the time, Jefferson Parish had an outreach program sponsored by USA Dance in my school (A.C. Alexander Elementary in Kenner),” says Torres. “I jumped in basically to show up my sister, but I loved the character of all the dances and ended up loving it. It just kind of took off from there.”

His success isn’t exactly a shock to those who know him well. “I’m not at all surprised that Osman has had success in competitive dancing,” says Troy Baglio, Jesuit’s defensive coordinator. “He was undersized for a defensive lineman, but his footwork was exceptional.”

Senior Stephen Brown, a close friend who played alongside Torres on the defensive line, concurs. “He definitely played bigger than he was,” says Brown. “He was always lining up against stronger guys. Success for Osman was all about the footwork.”

“I actually got to see him dance at a competition once,” Brown continues. “I was blown away. I’m not exactly a dance expert, but from what I could see the guy has some serious talent.”

On March 29, eight years of dance training paid off in a big way. Torres trumped his state championship football trophy with a national dance title. Together with long-time partner Taylor Schoen of Baton Rouge, he won first place in the Amateur Adult Silver Rhythm category at the USA Dance National DanceSport Championships in Baltimore, Maryland. 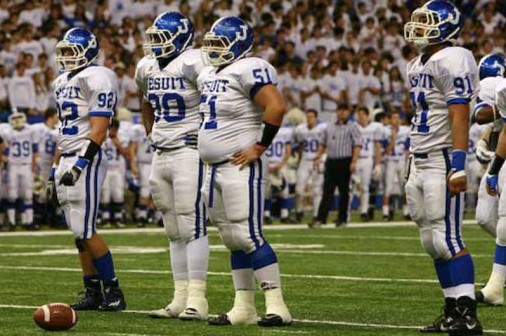 Torres, far right, was undersized for a defensive lineman, but made up for his stature with excellent footwork. He notched 97 tackles (38 of those solo) and five quarterback sacks during the Blue Jays’ run to the state championship.

Performing a three-dance repertoire before a seven-judge panel, Torres, 18, and Schoen, 16, dominated their competition, capturing the overall title by finishing first in Swing, first in Cha Cha, and second in Rumba.

While the first place finish was the highlight of their weekend, the duo also fared pretty well in the Amateur Adult Bronze Latin competition, finishing second in a field of 15 teams. The couple was very excited about this because they just began training in this style in September of 2014.

Torres and Schoen capped off their week with a 6th place finish in the Amateur Adult Silver Smooth competition, which included Waltz, Tango and Foxtrot components.

“They just flat-out nailed it,” said La Tefy Schoen, Taylor’s mother, who serves as the pair’s de facto manager. “I couldn’t have been more proud. They have pulled together as a partnership and overcome many obstacles including finding time to train and practice despite living in separate cities, and in spite of Osman’s demanding football schedule.”

“They make a great pair,” continues Schoen. “Taylor is the showman. She can really sell it. Osman, meanwhile, is a smooth and graceful leader.  They complement each other beautifully and are fun to watch on the floor.”

As if the accolades at the competition weren’t enough, LaTefy Schoen was approached in Baltimore by people well regarded in the dance world who informed her that, with the right training, Torres and Schoen could be serious contenders for spots on the USA World Team, which competes internationally representing the U.S. in the World Games and other prominent competitions that include DanceSport. As if that’s not enough, DanceSport is on the short list of sports being considered for inclusion in future Olympic competition.

The couple plans to continue to work toward their goals when Torres moves to Baton Rouge to attend LSU. For the moment, though, training is on hold.

By the end of the football season, Torres was playing with a torn labrum in each shoulder. Doctors advised him that surgery could wait, assuming he could handle the pain. So Torres played on.

He danced on as well. “I figured that if I could handle football, I could handle dance,” said Torres. “And it wasn’t just about me. This is a partner competition. I couldn’t just bail out on Taylor.”

And so the decision was made to postpone surgery until after nationals. 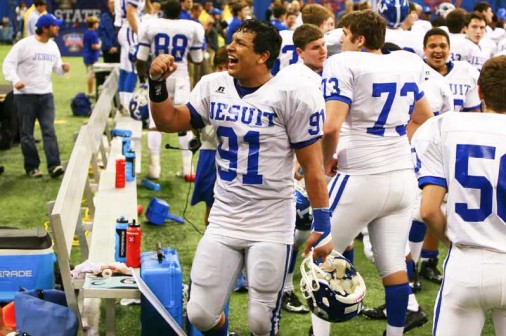 Torres looks to his family in the stands as he celebrates the state championship win over John Curtis.

“That’s just the kind of guy Osman is. His work ethic is amazing,” says dance partner Taylor Schoen, who attends The Runnels School in Baton Rouge. “I like to think I would do the same for him.”

So is he glad he waited?

“Definitely,” said Torres, who underwent the first of two shoulder surgeries on April 9. “It was great to win a title, but the exposure from this competition was as important as getting the ‘W’.”

“I’m actually more happy for my parents than I am for myself,” Torres continues. “They are such an inspiration. They have made incredible sacrifices for our family. To see their joy when I do well, whether it’s on the football field or the dance floor, it’s just overwhelming.”

After recuperation, it’s back to the grind of training—and the even bigger grind of fundraising. “Everybody at the next level, unless they are independently wealthy, has to hustle for sponsors,” says La Tefy Schoen.

“Our web presence is helping,” says Schoen. “But we’ve got a long way to go. One thing’s for sure, though. I’m not going to stop fighting to help these two reach their potential.”

Nola.com – Jesuit football player from Kenner also a champ in the ballroom