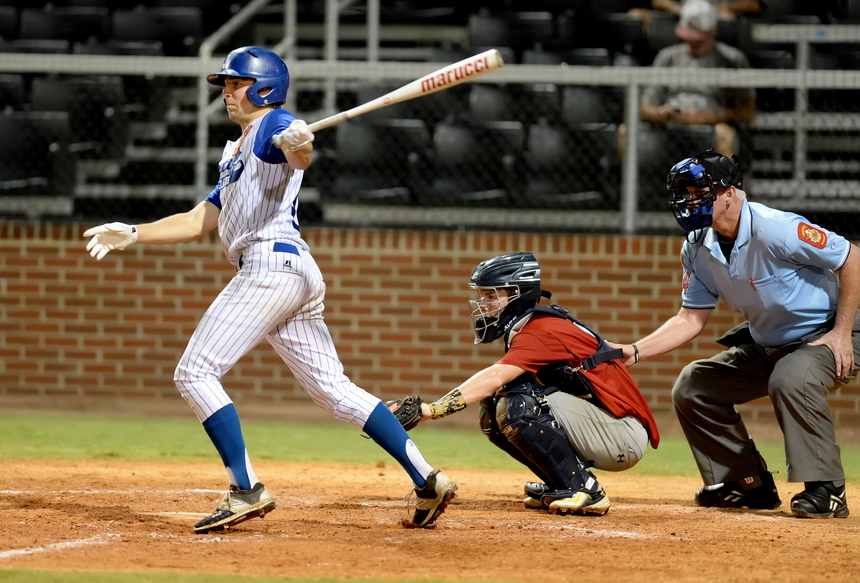 In Retif’s first two games, Ben Hess has collected four hits on seven at-bats. He’s scored five runs and stolen a base. His batting average of .571 puts him in a three-way tie for second place among all the players at the Legion’s Mid-South Regional Tournament. (Photos by Karen E. Segrave  kesphoto.com)

Bulletin: Retif defeated Lawton, OK, 9-2, in Friday night’s game in Conway, AR. The win leaves Retif as the only undefeated team in the American Legion Mid-South Regional Tournament. The win also guarantees that the Oilers will play for the championship on Sunday. Retif’s next game is Saturday at 6 p.m. against Bryant, AR.

Check Back for Additional Coverage of Retif Oil vs. Lawton, OK

Listen to KASR’s Radio Broadcast of the Games 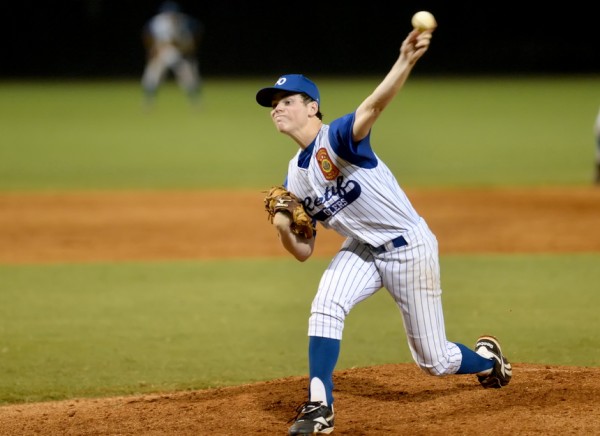 After two games in the American Legion’s Mid-South Regional Tournament in Conway, AR, the Retif Oilers are one of only two teams that remain undefeated.

So Retif’s Friday night game against Granite, OK, the only other undefeated team, will be a showdown of sorts. First pitch is approximately 7 p.m.

The Oilers have been swinging heavy bats in their first two games, defeating Kansas, 13-2, in Wednesday’s rain-delayed opener and pummeling Tupelo in Thursday night’s game, 11-2.

Retif’s 24 runs are the most scored in the first two games by any team in the double elimination tournament, which is being played at Hendrix College. Retif’s two-game total of 19 hits is bested by the 23 hits from the state champion teams from Oklahoma and Texas. The Oilers are batting .297 as a team, second only to League City, TX with a .311 team batting average.

Against Tupelo Thursday night, Retif scored two runs in the bottom of the third inning, then exploded for seven runs in the fourth. Right fielder Ben Hess has been nothing short of phenomenal at the plate. In seven at-bats, Hess has four hits, including three doubles. He has three RBIs and has scored five runs. Hess’s .571 batting average puts him in a three-way tie for second place amongst the players from all eight teams. After two games, catcher Trent Forshag has collected three hits on seven at-bats for a .429 average. In the game against Tupelo, Forshag was given the night off behind the plate and served as designated hitter. Forshag’s five RBIs are the most of any player. Shortstop Nick Ray and third baseman Scott Crabtree each carry a .286 batting average.

Davis Martin picked up the win against Tupelo and is one of only two pitchers who has gone the distance of nine innings. Martin, a southpaw, gave up nine hits to the Tupelo players and allowed two runs. He struck out three batters and didn’t allow a single walk. Martin threw a total of 104 pitches (not 67, as previously reported based on Legion-issued statistics).

If Retif beats Oklahoma, the Oilers will play at 6 p.m. Saturday; if Retif loses against Oklahoma, they play Saturday at 2 p.m.

Ardent Oiler fans are crossing their fingers that their boys will continue to play well in Conway and eventually win the championship, earning a trip next week to the American Legion World Series Tournament in Shelby, NC.

View the Game via Gametracker

Coverage of the Regional Tournament by the Arkansas Democrat-Gazette